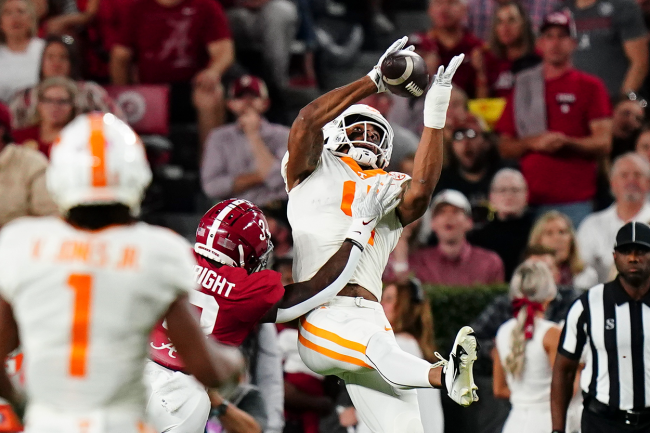 Name, Image and Likeness has created a lot of issues that pretty much everyone could have seen coming. Particularly within college football.

However, with all of the bad, there has been plenty of good. Texas Tech women’s basketball’s emotional reaction to new lucrative deals, Nebraska wide receiver Decoldest Crawford signing a deal that perfectly reflects his first name, and Tennessee basketball star Zakai Zeigler getting his family a new house are just a few perfect examples.

As is Cedric Tillman’s newest announcement.

Tillman, also an athlete at the University of Tennessee, was the Volunteers’ leading receiver last fall. He caught 64 passes for 1,081 yards and 12 touchdowns.

As a senior in 2021, Tillman had two games with two or more touchdowns scored. He caught six passes for 106 yards and two scores in the regular season finale against Vanderbilt and seven passes for 150 yards and three touchdowns in the Music City Bowl against Purdue.

Cookie-loving Tennessee fans will hope that Tillman can follow up his performances in the last two games of last season with similar performances in 2022. If he does, they’ll be enjoying the benefits of his new NIL deal.

Tillman announced on Friday that he has partnered with Moonshine Mountain Cookie Company, a gourmet cookie company out of Knoxville, TN.

His deal is one of the best in all of college sports.

After any game in which Tillman catches two or more touchdowns, every person who steps through to doors of Moonshine Mountain Cookie Company’s two locations is entitled to two free cookies. They normally retail for $2.70 each.

UT fans I’m your new Cookie Monster🍪🍪. You guys get 2 free cookies when I catch 2 TDs in any game this year!! #cookiemonster #moonshinemountaincookies #gbo pic.twitter.com/y2dj17BoVQ

This is the second year that Moonshine Mountain has done this deal. Last year, every time that defensive back Alontae Taylor made an interception, fans got two free cookies. It led to a very interesting conundrum.

This year, Tillman is the Cookie Monster. Poised for a big year as the star pass-catcher in Knoxville, he will hope to bring wins to the Vols and cookies to the fans.