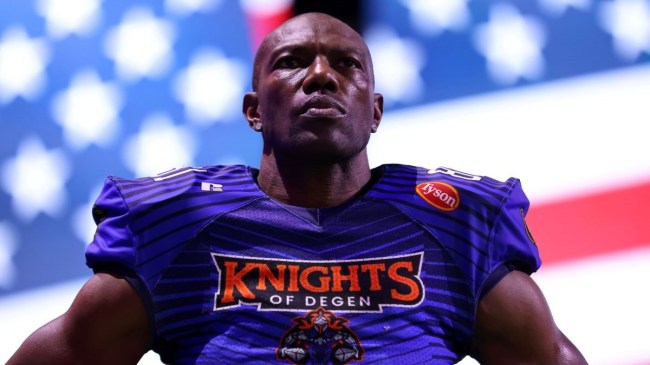 Terrell Owens is one of the best wide receivers to ever play in the NFL. Owens, a Pro Football Hall Of Famer, probably should have gone in on the first ballot.

Simply put, T.O. was a generation-defining wide receiver. But he was also known for his outlandish personality. Who could forget him doing sit-ups in his driveway while holding out of Eagles practice?

Wherever Terrell Owens goes, the cameras quickly follow. Now it appears Owens may be going back to the place where it all began, San Francisco.

At 49 years old, Owens is now long-removed from the NFL. In fact, he’s made a pretty good case for a second career inside a boxing ring.

But it appears that he’s still got football on the brain. And even 12 years out from his last NFL game, Owens believes he could still play in the NFL. In a recent interview on San Francisco radio station 95.7 The Game, he told hosts that a return to playing isn’t out of the question.

“Oh yeah, absolutely,” Owens said. “Hey look, man, I’ve already kind of sprinkled some words out there. Like yo, if you guys need a receiver, I’m good. Listen here: third down, red zone, trust me. I’m a very valuable asset.

As we all know, T.O. loves himself some T.O. But don’t tell me you wouldn’t at least be a little bit curious to see this happen.