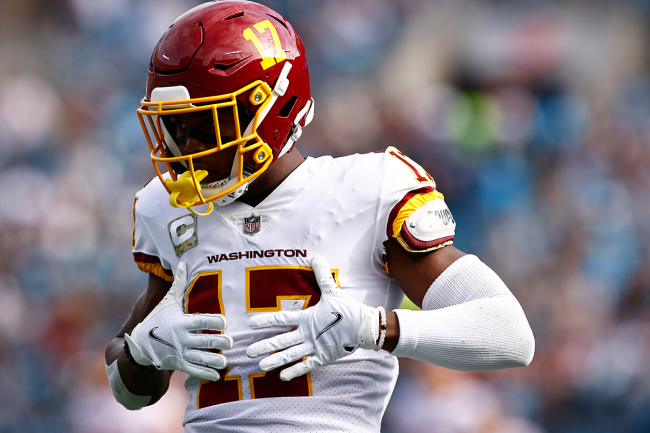 As Washington wide receiver Terry McLaurin enters his fourth year in the NFL, he is not on the field. The 26-year-old is holding out and a lot of speculation has been made about his future with the Commanders.

However, it does not appear as though ‘Scary Terry’ is going anywhere.

McLaurin, who was drafted in the third round of the 2019 NFL Draft out of Ohio State, has significantly out-performed his rookie contract. He has recorded 1,000+ yards in each of the last two years and fell just 81 yards short as a rookie— leading the team in receiving all three seasons.

As a result, it would appear as though he believes that he deserves more money. Although the exact reason for his holdout is not public, the obvious assumption would be that he is choosing not to partake in team events until they sign him to a new extension.

There have been quite a few WR1s who have been paid during the offseason and McLaurin wants his fair shake. Both sides are reportedly far apart in their negotiations but Washington is optimistic that an agreement will be reached prior to the 2022 season.

Now, the numbers involved here are unclear, but there is always the chance that the team could trade their top pass-catcher and allow him to get paid elsewhere. A similar situation played out with A.J. Brown earlier this spring.

According to head coach Ron Rivera, the Commanders will not be trading McLaurin.

Rivera made McLaurin’s future with the organization very clear with just four words on Wednesday.

Technically, the head coach does not have a say in roster management. The general manager could choose to trade McLaurin.

However, based on reports around Washington’s power structure, it appears as though Rivera has the final say about his players. If that is really the case, then Rivera’s four-word statement on McLaurin’s future is the definitive truth.