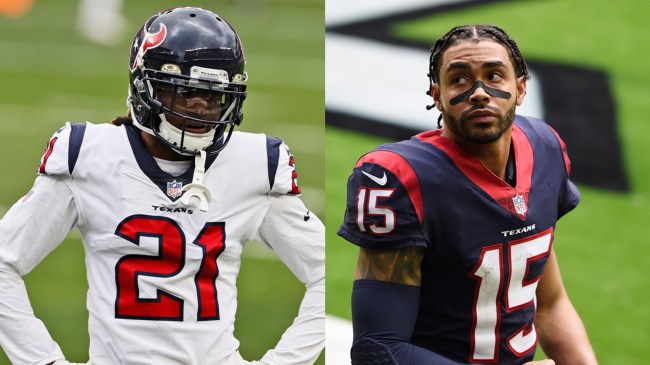 Steroids are rampant in the NFL. Always have been, always will be. Joining the list of prosecuted perpetrators for use of a banned substance are Houston defensive back Bradley Roby and wide receiver Will Fuller V, who were both suspended six games on Monday for violating the league’s policy on performance-enhancing drugs.

Fuller, who is coming off of a six-catch, 171 yard and two touchdown performance against Detroit on Thanksgiving Day, said in an Instagram that the violation was a result of his prescribed medication that is not permitted under the policy.

Roby recognized his mistake in a tweet on Monday night and apologized to both his family and teammates for unknowingly using a product that was contaminated with a banned substance. 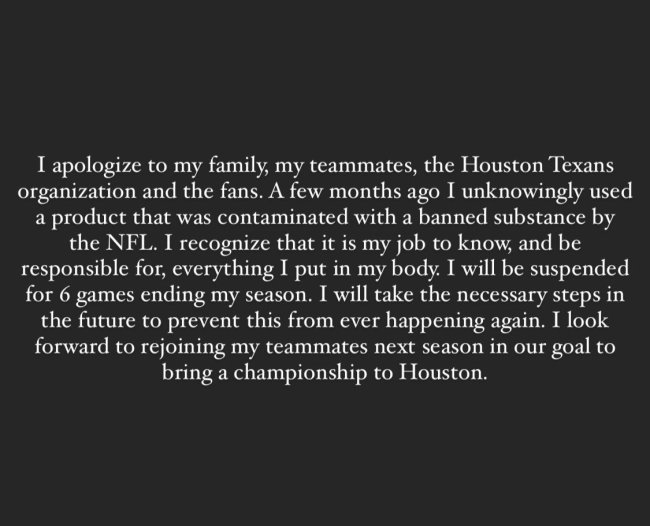 I am a firm believer in innocent until proven guilty, which of course they are, but both of the suspended players’ reasoning seems valid. However, statements of “unknowing” or “accidental misuse” are standard from an athlete in any sport that got popped. It makes me wonder how Fuller has never failed a drug test with his medication (that he presumably has taken for awhile) and why Roby didn’t know what he was taking. Ignorance is bliss and mistakes happen, I guess.

However, there is one conspiracy floating around regarding the PED usage. Assistant strength and conditioning coach Brian Cushing is a notorious steroid-user. Could he be behind the suspensions?

Cushing, who played nine years with Houston after being drafted in the first round out of Southern California, was the defensive rookie of the year in 2009 and missed the first four games of 2010 for violating the PED policy. He dealt with consistent, different injury issues throughout the middle of his career but still managed to be a consistent producer at linebacker and was an absolute lunatic.

However, in 2017, he was suspended ten games for again violating the banned substance policy, effectively ending his career. He was released by the Texans a year later and joined the strength staff in 2019. He was one of the more violent players on the field in high school, college and in the pros, and his steroid-induced transformation surely played a role in that.

There is zero (none, nada, zilch) damning evidence for either Roby or Fuller to have been involved in Cushing’s illegal weight-training program, but it certainly makes you think, no?