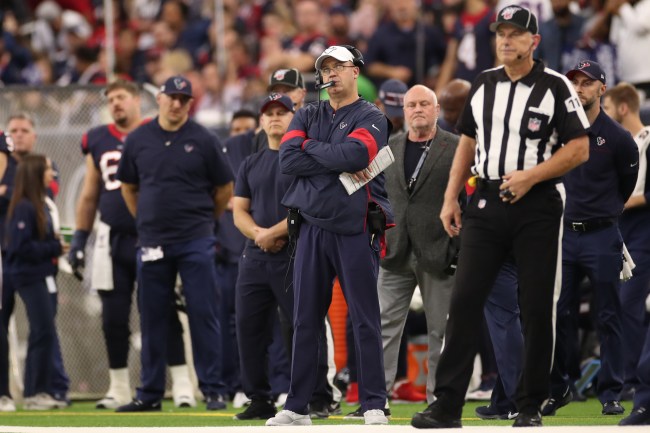 The Houston Texans got up to a quick 24-0 lead but Bill O’Brien is catching heat for some of his decision-making in the first half of the Chiefs-Texans divisional playoff game.

While up three touchdowns, O’Brien decided to kick a field goal instead of going for it on 4th and 1 from the 13 yard line.

On the team’s next drive, O’Brien for whatever reason decided to go for a fake punt in the Texans territory which led to the Chiefs scoring a touchdown on a short field.

WE'RE NOT OUT OF THIS 🏹 pic.twitter.com/1nPm0ZyuyR

The Chiefs were able to cut the lead down to three points before the half and Texans fans were pissed.

Bill O'Brien can take the whole-ass blame for this.

Gotta love Bill Obrien. Won't go for it 4th and 1 near the End Zone, but will fake a punt at his own 30.

I don't care what happens from here on out, Bill O'Brien is single-handedly sabotaging his team's chances at winning this game.

How can you be such a dumbass in nearly every situation?

This is why Houston cannot have nice things.

I’ll never get this. You don’t go for a on 4th and 1 in the red zone but you will do a fake punt on your side of field…

Go for it on 4th & 4 from midfield pic.twitter.com/hDNWQDhU4X

So, let’s recap this:

Not going for it on 4th and 1 deep in Chiefs territory and then faking a punt on the -35 is…interesting.