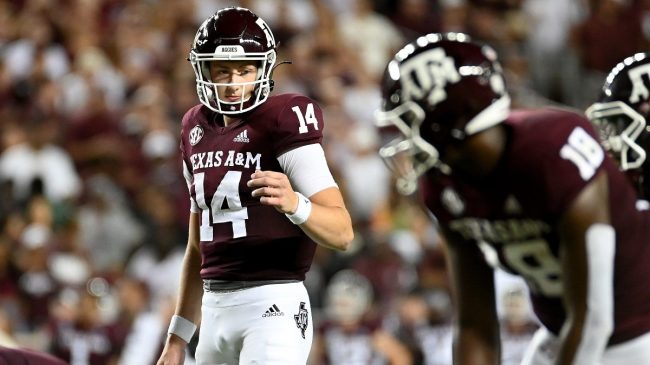 The Texas A&M Aggies might be in trouble on Saturday, as the team faces an uphill battle against the Alabama Crimson Tide. They’ve gone back and forth at the quarterback position, however, a new injury to Max Johnson changes the outlook on the 2022 season.

According to Ian Fitzsimmons, “Johnson has a broken bone in his throwing hand.” For now, he’s ruled out for the foreseeable future, but there is a chance he’s done for the season. With that in mind, Haynes King will reprise his role as the starting quarterback, just in time to face off against Alabama.

I am told Texas A&M QB, Max Johnson has a broken bone in his throwing hand. Sadly, he might be done for the the season – at the least the foreseeable future.

Last year, the Aggies found a way to upset the Crimson Tide. However, this season is a completely different story. Alabama has looked solid so far, while Texas A&M has two tough losses on their record. Either way, Jimbo Fischer is likely to have his team ready, as he and Nick Saban have built up quite the rivalry.

It’ll be interesting to see how this game plays out. The Aggies could find new life with a sudden quarterback change. Even so, it’s hard to imagine Alabama losing to Texas A&M this season, as Haynes King began the year as the starter, to begin with.

King has put up a measly 510 passing yards, three touchdowns, and four interceptions off of 64 attempts. There’s a reason why Texas A&M went to Max Johnson, however, this injury hinders the Aggies’ chances. Regardless, never say never, as college football can be incredibly unpredictable.