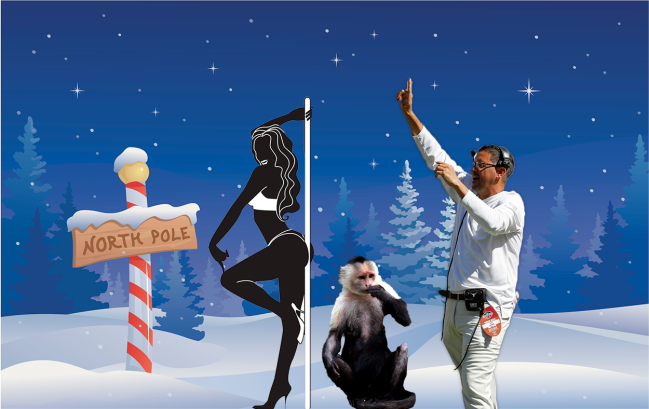 As Christmas quickly approaches, people across the globe are beginning to prepare their decorations in anticipation of December 25th. Among them is a Texas A&M fan who is living in Austin, which is notoriously Texas Longhorns country.

Taking his odd-man-out fandom in stride, he has decided to take direct shots at his in-state rivals with his holiday decor. Specifically, he is playing into the off-field incident that continues to unfold with Longhorns special teams coordinator Jeff Banks and his stripper girlfriend’s emotional support monkey.

Earlier this year, on Halloween night, a report began to surface out of Austin. Banks’ girlfriend, who he left his wife and children for a few years back, owns a monkey who allegedly bit a trick-or-treater.

The monkey, named Gia, often performs with her owner on-stage. They are truly masters of their craft.

Banks’ girlfriend Danielle Thomas, who is better known by her stage name ‘The Pole Assassin,’ offered her side of the story after the alleged incident occurred. Since then, her account of what happened has been used against her in a lawsuit. The alleged details of what actually happened are wild.

Although the legal saga continues to unfold in court, the Austin-based Aggie fan is not holding back.

To celebrate the Christmas season, he set up his own version of the Banks household. The scene, brilliantly titled ‘The North Pole Assassin,’ features The Pole Assassin working a candy cane while Banks and their monkey looks on.

You too! Got my decorations out! pic.twitter.com/Nhng9a07bj

Remember, the man who set this all up lives in Austin. His Longhorn neighbors have to drive by every day and be reminded of the fact that their special teams coordinator left his wife and children for a stripper named The Pole Assassin whose emotional support monkey bit a trick-or-treater.