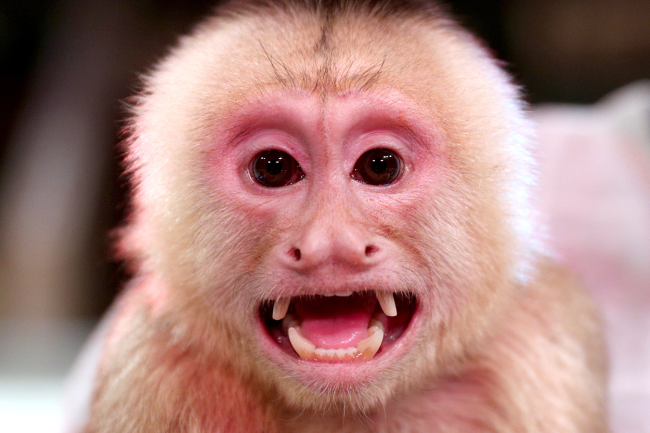 The Pole Assassin and her boyfriend, Texas special teams coach Jeff Banks, are being sued. The lawsuit comes after The Pole Assassin’s emotional support monkey allegedly bit a trick-or-treater on Halloween.

If you have not heard by now, The Pole Assassin is not her birth name. Banks left his wife and kids for a woman named Dani Thomas a few years back.

Thomas is a stripper who is unbelievably athletic and goes by ‘The Pole Assassin.’ She truly assassinates poles.

Sometimes, during her performance, The Pole Assassin brings her monkey, Gia, on stage with her. They make serious money together and apparently became friends with Cardi B along the way.

Well, on Halloween, Gia bit a child. That part is not alleged. That is fact and Thomas admitted so herself.

However, the stories between Thomas and the plaintiffs are different. Very different.

Per Thomas in a since-deleted video, the child was not allowed near Gia. The lawsuit says otherwise and alleges that Thomas invited the child who was bit to see Gia. He then, allegedly, was told that the monkey is trained to give high-fives, but when he stuck his hand out, he was bit.

That story corroborates to the initial report back at the beginning of November. It is different than the story Thomas told, although she did acknowledge that the bite happened.

Details from the lawsuit are wild. One in particular is laugh-out-loud funny.

According to the lawsuit, the bite was pretty serious.

“Instead of giving a high five, Danielle Thomas’s monkey aggressively bit down on (the child’s) hand and refused to let go. (An adult) was forced to manually pry the monkey’s jaw open.”

After the child was bit, he or she was treated by a nearby physician. This is where it gets funny.

The doctor, trying to treat the child, went to Thomas’ house to discuss the incident. The doctor wanted to know whether the monkey had received all of its shots.

In response, The Pole Assassin gave a hilarious answer.

There you have it! No rabies!

The lawsuit then goes on to discuss Thomas’ twitter rant, claiming that she made false statements to try and protect the monkey. She has since deleted her Twitter.

Although it is unclear who is telling the truth, that will be determined in a court of law. But for The Pole Assassin to answer a question about Gia’s vaccines by saying she had been bit before and is fine, is hilarious.