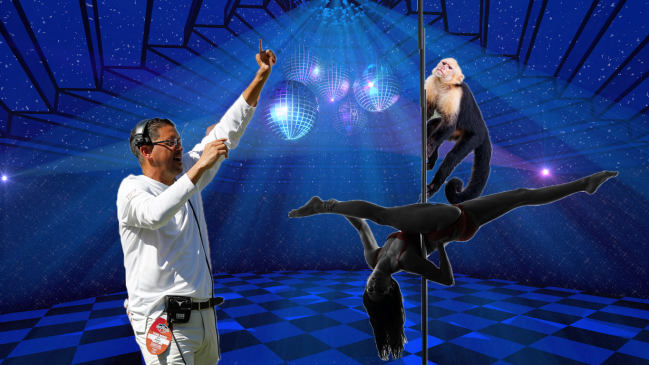 One child allegedly overstepped his or her boundaries while trick or treating at a home in Austin, Texas on Sunday night. That house belonged to Texas special teams coordinator Jeff Banks.

Banks, 46, is a big name in college football. He has quickly risen through the ranks of the sport and has quite the resume:

As the coaching carousel has gone around over the past few years, Banks’ name has been thrown into the mix for more than one opportunity. He’s considered that much of a prodigy, especially after working under Nick Saban.

For Longhorns head coach Steve Sarkisian to hire Banks away from Tuscaloosa was considered a seismic move and he is set to make slightly more than $3,000,000 over the course of the next three years.

From a personal standpoint, Banks had has a girlfriend since February 23, 2017. She is a stripper who goes by the name “Pole Assassin.”

The Pole Assassin and her monkey.

Banks’ girlfriend’s portfolio of work is remarkable and she has become quite the sensation within the stripper world. As a part of her legend, she performs with her emotional support monkey, Gia.

Allegedly, Gia bite a tricker treater on Sunday evening at Banks’ home in Austin. The Pole Assassin is not denying that such an incident happened, but she is claiming that it was provoked and was not vicious, as some reported.

In addition to her written account of the events, which was posted on her since-deleted Twitter profile, she also posted a video explanation. Banks’ girlfriend says it is “sad that people have to go all out of the way to prove that a person is lying.”

She then details her backyard and shows a gate that “every child and parent was told to turn around at when the got to.” The Pole Assassin says that it was closed and blocked off with balloons.

After entering the gate, she shows how far the child walked within her and Banks’ backyard “without permission,” which was “all the way over where the animals live.” At the end of the walk, a sign reads “DO NOT ENTER! EMOTIONAL SUPPORT ANIMAL NO TOUCHING.”

The cage that is behind the gate, where Gia lives, is rather tightly strung. As Banks’ girlfriend says, it is hard to imagine Gia “viciously biting” someone without said someone sticking his or her hand in the cage.

Banks’ girlfriend says that she “does not even play when it comes to her animals and “knows all of the legal rules on them.” She also makes a great point that it was Gia’s home.

Would you not attack an intruder if he or she entered your home? It certainly seems like Gia was acting in self defense.