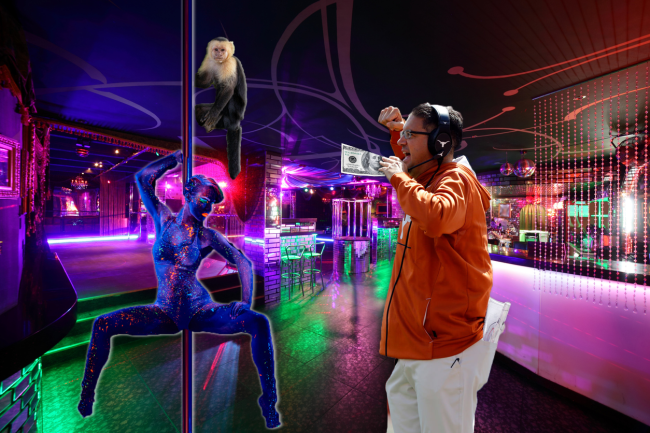 Texas football assistant coach Jeff Banks makes a lot of money. He is the first special teams coordinator in college football history to receive a contract for at least $1 million in salary per year, but his girlfriend doesn’t do too bad either.

Banks’ girlfriend, Dani Thomas, is a stripper that goes by the name ‘The Pole Assassin’ and is incredibly talented. You can find some of her work HERE.

What makes The Pole Assassin different from other adult entertainers is two-fold. For starters, she performs some unbelievable moves that you simply have to see to believe.

And to make her act even crazier, she often takes the stage with her emotional support monkey, Gia. Gia is a white face capuchin and knows how to work both a crowd and a pole.

However, she has recently caused quite a stir by allegedly biting a trick or treater at Banks and Thomas’ home on Sunday. Thomas offered her story about what happened and did not claim innocence, but claimed that Gia was provoked.

Regardless of what happened on All Hallow’s Eve, it doesn’t take away from Gia and The Pole Assassin’s talents. The duo, particularly Thomas, is frequently invited to perform on the stages of some of the nicest and best nightclubs all across the country.

And she cleans up.

The Pole Assassin posted a photo on her (since deleted) twitter account from when she performed at G5 Primetime Strip Club in Houston and it’s astonishing. The photo, with the caption “G5 was lit” shows her leaving with two big sacks of cash. G5 brands itself as Houston’s only “upscale international sports and entertainment club.” It takes “the best parts of a Restaurant, Night Club, Gentlemen’s Club, Bikini Bar, Hookah Lounge, Sports Bar and After-Hours and combines them all under one roof.”

As such, it offers over seventy-five of the “hottest Latin, exotic and all-American entertainers” that Houston has to offer. The Pole Assassin is one of them.

Whether you are a ‘strip club person’ or not, it’s simply impossible to deny her skills and it’s not hard to see why she does so well financially.

But just how much money does she make?

While the exact dollar amount is unclear for The Pole Assassin’s single-night take home in Houston, a Reddit thread has estimated a ballpark number.

As one commenter explains:

I found an estimate (German source pdf – they simply measured volume and weight of tons of leafs picked up by grabage disposal) on the density of leafs at 0.25 t/m³. This is estimated from high amounts of leafs, so it is way more dense than what would be in that bag, as the pressure increases density in that context. Also the leafs are probably more wet than dollars and therefore more dense; You can see in the picture that the dollars are not compressed in one dimension (vertical) the density in this direction is lower, giving an estimate for seemed difficult, I would say 1/10th is appropriate, and probably still too dense. this would leave a total density of 0.025t/m³.

If the bag is an 80 liter trash bag, and about 66% full, the weight would be around 2 kg, which matches with my gut feeling on bags you can hold in that fashion.

Now, it is important to note that not only is this an estimation, but the commenter’s calculations sit on the lower end. Thus, we can guess that each bag over The Pole Assassin’s shoulder is somewhere between $2,000 and $2,500.

Multiply that number by two, for two bags, and The Pole Assassin made somewhere between $4,000 and $5,000 for one performance. Not too shabby, especially considering that Banks is a millionaire.