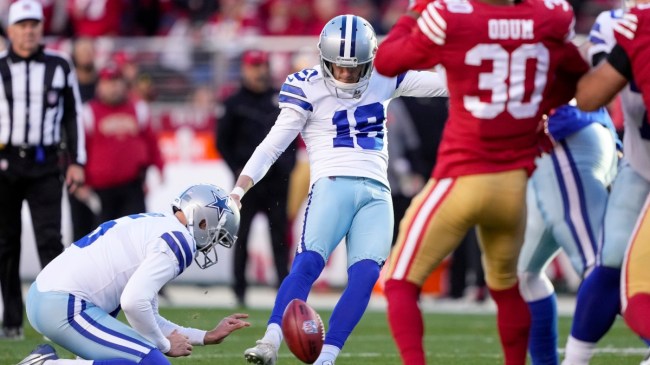 The Dallas Cowboys are battling it out in the NFL playoffs and their kicker Brett Maher isn’t helping in the slightest. He missed another PAT attempt and it’s not a great look.

However, he’s now getting roasted by Texas governor, Greg Abbott.

Barstool Sports shares the blocked kick that prevented the Cowboys from scoring seven points on their first score of the game. The kick was ultimately low, and if you watch it in slow-motion, you’d see the ball never had a chance, to begin with. Had it not been blocked, the trajectory looks like it would have been wide left.

This is truly a remarkably bad run from Brett Maher. So bad it’s almost impressive. pic.twitter.com/uhjSf3ouvu

Pretty much everyone is roasting the Cowboys’ kicker at this point. However, things took a turn when Greg Abbott entered the chat.

I swear, I can kick as good as the Dallas Cowboys kicker.

You’d think that’s a pretty tame roast at first until you realize the context. For anyone who doesn’t know, Abbott has been in a wheelchair since 2013 after a tree fell on him and crushed his spine. He hasn’t been able to walk ever since. So, he basically shredded the Cowboys kicker in half with a single tweet.

For that reason, the Texas governor might have already won the best tweet of 2023. Football fans seem to agree as well.

There’s no other word to describe it.

Maybe Brett Maher can turn things around in the game. Even so, the Cowboys kicker is surely not recovering from that roast once he sees it.