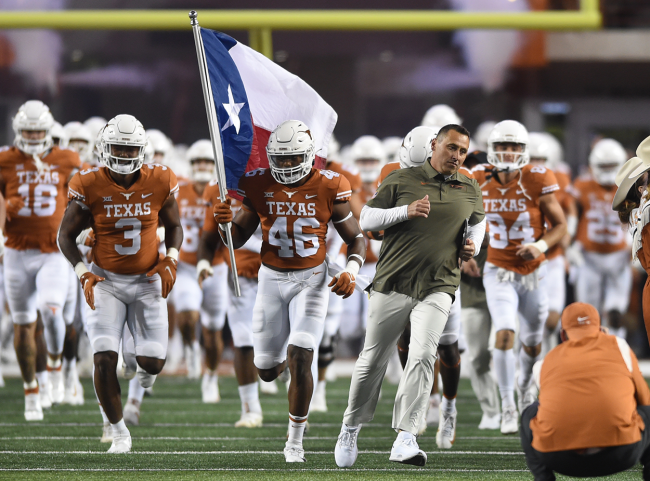 There is no way to tell whether Texas football is “back” until the Longhorns take the field in 2022. However, based on the buzz around the program and strictly vibes, it seems like head coach Steve Sarkisian’s team is set to ride the current momentum to success.

Texas finished the 2022 recruiting cycle with a top-five class and currently sits within the Top 25 for 2023. There is a lot of time left in the current cycle, as it’s only really just begun, but the Longhorns already have a few high-impact commitments.

Among the players that will wear burnt orange not this season, but next season is S’Maje Burrell. The four-star linebacker stands 6-foot-1, 215 pounds, which is rather big for a current junior in high school.

Burrell has more than 20 D-I scholarship offers and it’s not hard to see why. He is incredibly athletic for his size.

While on campus in Austin, Burrell put some of his athleticism on display.

The big linebacker commit visited Texas for a Junior Day over the weekend. As is the norm in college football recruiting these days, a big emphasis was placed on visual media.

An arms race for videographers, editors, photographers and designers is unfolding across the country. It has led to some really amazing recruiting photoshoots.

Examples include Notre Dame’s old-school cathedral shoot, a recruit dunking on his own dad, a five-star quarterback taking pictures in a G-Wagon, Texas recruits wearing a ski mask and cowboy hat, and Lane Kiffin taking extremely icy pictures with recruits in his Aston Martin. Every school is different in exactly what they do, but they all do something.

At Texas, who uses the mantra “All Gas, No Brakes,” recruits took their photos on the field at Darrell K. Royal – Texas Memorial Stadium. Burrell casually threw a backflip and it was sick.

Remember, Burrell is 6-foot-1, 215 pounds and got that much elevation on his flip. Ridiculous.