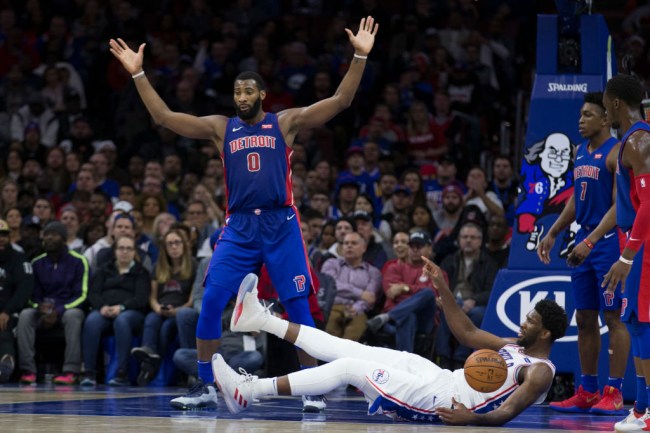 It all started with a cartoonish flop.

The big men’s beef reached new heights last night. With under a minute left in the fourth quarter and the games knotted at 118, Embiid finished over Drummond to put his Sixers up two. He then proceeded to take a soccer-esque dive after getting minimal contact from Drummond as he attempted to run back on defense. As Embiid picked himself off the ground he could be heard yelling “get him out of here!” The refs obliged and Drummond was ejected from the game.

Joel Embiid got Andre Drummond ejected, and he let everyone know pic.twitter.com/16p7xDKp4J

Embiid finished the game with 33 points and 11 rebounds, whereas Andre tallied 14 points and 16 rebounds. Luckily for Drummond, Blake Griffin allowed him to employ the “scoreboard” rebuttal in the feud, as Blake scored a career-high 50 points, including a game-winning and-1 in the waning seconds.

Embiid didn’t care. He said after the game:

“I think I own a lot of real estate in his head,” Embiid told reporters after the game. “We lost, so I’m not supposed to talk trash, but he knows damn well that he can’t guard me.”

To which Drummond responded:

Lol does he? If that’s so he wouldn’t be so excited to have me off the floor? Think about it that’s a silly statement ! I’ll take the W though enjoy flight home #Emmyaward winning actor

Andre wasn’t done there. The two-time NBA All-Star hit back in the Instagram comments of a post, affirming Embiid’s claim to have real estate in his melon.

Embiid has been known to appear gassed at the end of games. But to say that you ran him to exhaustion when he put up two of his 33 points over you in the final minute is delusional.