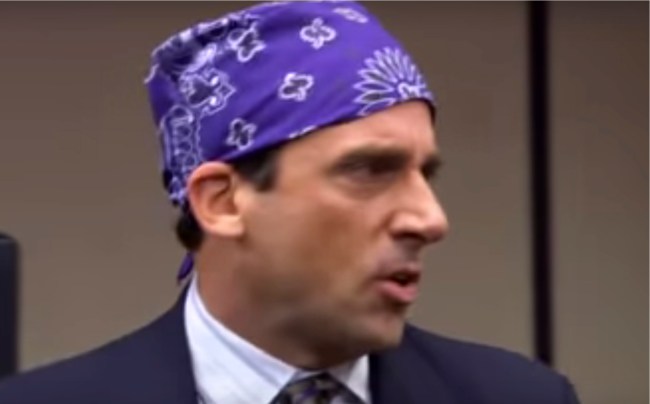 The Office is still one of the best TV shows ever, and, yes, I’m unafraid to admit that I still watch the syndicated reruns that air on numerous channels when I’m bored AF. There’s a good chance you do, too, because, if we’re being honest, there’s nothing better than the awkward AF Michael Scott trying to motivate his entire staff in the most absurd ways ever. There’s drama, there’s wit, there’s comedy, there’s everything that someone needs to be satisfied after watching the show.

Although The Office officially ended in 2013, there are still plenty of memories from the show that still get dropped in conversation today. Whether it’s one of Michael Scott’s stupid quotes, or a reference to Schrute Farm, people can’t help but still love The Office. And one of those people happens to be Charlotte Hornets big man Frank Kaminsky, who just gave us the highlight of the NBA season by wearing customized sneakers that feature some outstanding moments from the show.

Just take a look at the complete fire Kaminsky wore on his feet prior to last night’s regular season finale against the Orlando Magic, which boast both Michael Scott’s and Dwight Schrute’s faces, and the legendary line, “You miss 100% of the shots you don’t take – Wayne Gretzky – Michael Scott” across one of the heels. They’re, in fact, perfect.

And here’s a closer look at The Office-inspired shoes on Frank Kaminksy’s big ol’ feet during last night’s game.

Just saw the BACK of Kaminsky's Office-themed shoes. Amazing. pic.twitter.com/xNblHdoFdp

NBA players are all about looking fresh with some pregame outfit that looks like they’re posing for a GQ magazine spread, but here’s Frank Kaminsky winning the fashion game by busting out some kicks that have some of the best parts from The Office on them. Sadly, we’ll have to wait till next season to see what Kaminsky has in store for an encore, because his Charlotte Hornets were eliminated from playoff contention last night.