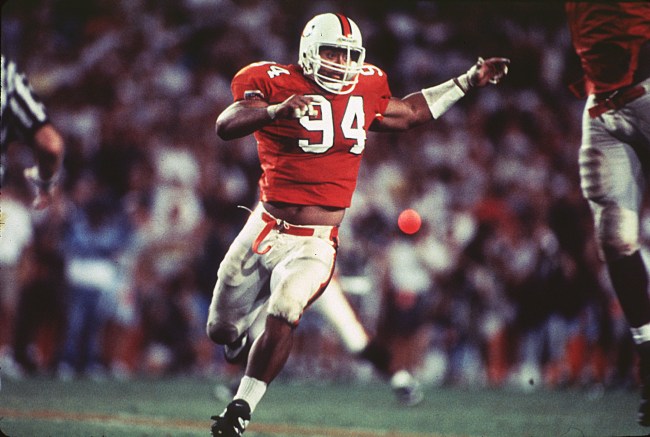 What a wild life Dwayne “The Rock” Johnson’s had to this point. From growing up as the child of a pro wrestler, to playing for the Miami Hurricanes football team, to becoming a pro wrestler himself to now touting himself as one of the biggest movie stars on the planet and an investor and entrepreneur, it seems like the 48-year-old has been able to live out every single one of his dreams.

Maybe best-known for being an agitator during his time in the WWE 25 years ago, The Rock pretty much made a living talking smack to his opponents while he was a pro wrestler. While most of us might think that was just him showing off his improv skills, according to his former Miami teammate, Warren Sapp, a bunch of Johnson’s smack talk actually came from Ed Orgeron — the current LSU Tigers head coach and former defensive line coach for Miami from 1988-92.

Appearing on Shannon Sharpe’s CLUB SHAY SHAY podcast, Sapp not only talked about what it was like to play college football with a young Dwayne Johnson, but also how some of The Rock’s well-known WWE phrases like “candyass” and “shoving it sideways” were some of the things Coach Orgeron would say to his players during a bad practice or game. Take a look below at the video.

.@WarrenSapp ranks Dwayne “The Rock” Johnson’s football skills as a 6:

“Dwayne was the type of player who wasn’t going to dominate a game or take it over. But he was good enough to where he wasn’t going to lose the game for you.” pic.twitter.com/M8vwhqYER2

Hey, we often pick up the habits of those closest to us, so hearing Sapp say The Rock used a lot of the smack talk Orgeron did to his players isn’t that much of a surprise. What’s funny is that Dwayne Johnson took things to a whole new level by using it in front of thousands in an arena while on the mic to get the people going — and piss off his opponents in the ring.

This isn’t the first time we’ve heard about Johnson incorporating some of Ed Orgeron’s sayings and mottos. In 2015, the football player turned wrestler turned movie star used the phrase “We Don’t Give a F–K” when describing his thoughts on that whole DeflateGate thing with the New England Patriots.

Per Bleacher Report, via Sports Illustrated:

“I had a coach, his name was Ed Orgeron, and he was our defensive line coach at the University of Miami. He’s a phenomenal coach and crazy as all hell. His sentiment to something like [Deflategate] is how we feel as defensive players.”

“We were raised in an environment at the University of Miami where Ed would say, “We don’t give a f–k.” You go after the quarterback the exact same way. You pin your ears back and get after it. And if the quarterback is able to get the ball off, then it’s your fault.”

From using similar smack talk for wrestling purposes to using it to describe his feelings on certain things, it’s clear that Dwayne “The Rock” Johnson has quite the affinity for his old college coach, Ed Orgeron. It’s pretty cool to see after all these years, too.