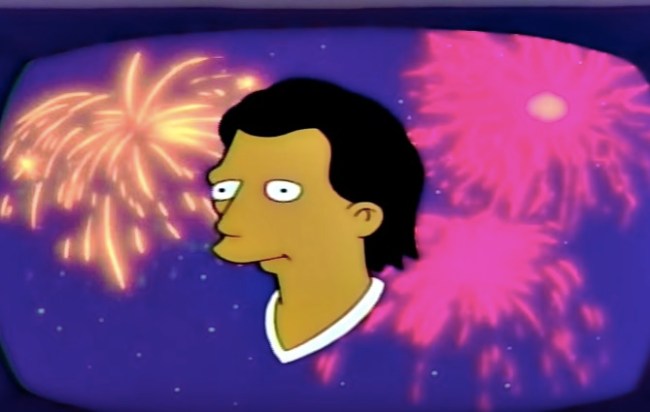 The Simpsons has a history of predicting the future. They predicted Donald Trump becoming President of the United States back in 2000. In 1993, they predicted that Roy Horn of ‘Sigfried and Roy’ would be mauled by a tiger in Las Vegas. In 1998, Homer predicted the existence of the ‘God Particle’ before the Higgs boson was confirmed by physicists in 2012.

The Simpsons predicted the rise of smartwatches all the way back in 1995. In 1997, they predicted the Ebola Outbreak in the USA which hit in 2014. They’ve also predicted Lady Gaga’s Super Bowl halftime show, Disney taking over FOX, the NSA spying scandal, FIFA’s corruption scandal, and Team USA winning the Gold Medal in Curling. They have LONG documented history of making predictions, and now FIFA World Cup fans think The Simpsons might’ve predicted the 2018 World Cup Final.

This prediction might be premature based on how today’s Mexico-Sweden game plays out. If Mexico advances out of the group they’ll end up on the other side of the bracket from Portugal. Back in ‘The Cartridge Family’ Season 9, Episode 5 of The Simpsons the writers predicted a Portugal-Mexico World Cup Finals matchup. The actual context here is a fictional match to ‘determine once and for all which is the greatest nation on earth’, Mexico or Portugal.

Mexico and Portugal fans are wondering if they're destined to reach this year's World Cup final – because of a Simpsons episode from 1997.

By the way, if you’re interested in getting down with DraftKings’ Showdown and Classic contests during the 2018 World Cup you’ll be interested to know that the top single performance relative to salary during this tournament has been Mexico goalkeeper Guillermo Ochoa (salary: $3,900 * 28 pts) in the win over Germany on 6/17. Mexico’s keeper has been the best keeper overall thus far in the 2018 World Cup. And these have been the most drafted players thus far: 1. Luis Suarez: 4.4M plays (Uruguay), 2. Neymar: 3.6M plays (Brazil), 3. Lionel Messi: 3.5M plays (Argentina), 4. Victor Moses: 3.3 M plays (Nigeria), 5. Christian Eriksen: 3M plays (Denmark).

As I’m typing this out, the Mexico-Sweden game hasn’t even kicked off yet and even with 6-points in the group stage there’s still a shot that Mexico doesn’t advance to the Knockout Stage based on goal differential. So this prediction could be dead in the water by this afternoon, or it could be well on its way to becoming just another feather in the cap of The Simpsons.