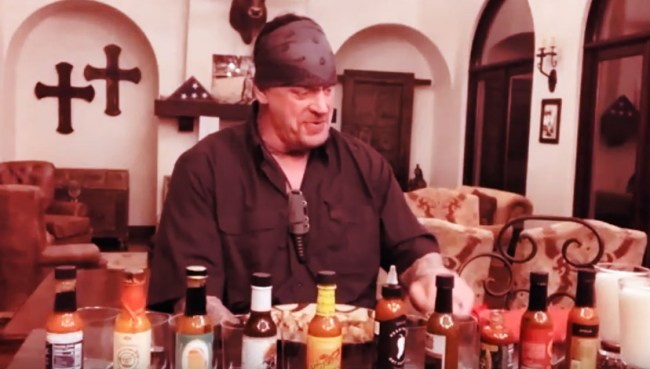 Mark Calaway, better known as 7-time World Heavyweight Champion The Undertaker, is arguably the greatest professional wrestler of all time.

On November 22, ‘Taker will be giving his “Final Farewell” at the 2020 edition of Survivor Series, the same event where he made his WWE debut 30 years ago.

So in celebration of that momentous occassion, the Deadman decided to appear on First We Feast’s “Hot Ones” to take on one last deadly opponent: the wings of death.

During his entertaining appearance on the show, The Undertaker talks about his early days performing under the name Commando in Central Illinois Wrestling, who was the best technical wrestler he ever saw, who was the most impressive physical athlete he ever saw, who was the worst prankster, the four wrestling matches that define how to perform, being the judge in backstage locker room beefs, meeting huge wrestling fan Post Malone, running into Matthew McConaughey on the campus of the University of Texas, Mike Tyson’s impact on professional wrestling, how he wants his fans to remember him, and tons more.

As for how ‘Taker handled the wings of death?

He actually fared better than probably 95 percent of the people who have appeared on the show. *cough* Steve Austin.

But then again, what else would you expect from the Lord of Darkness?