Three More Fights To Watch On The UFC 242 Main Card 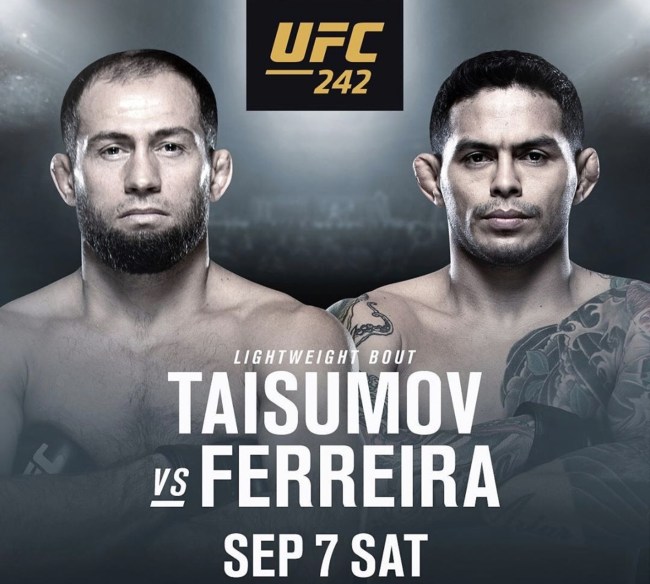 Look, there’s no doubt that the Khabib Nurmagomedov vs. Dustin Poirier main event is the big draw on the UFC 242 Pay Per View, but that doesn’t mean there aren’t other great fights on the card.

To be honest, the UFC 242 main card is pretty sweet. You know, if you’re into straight fisticuff. And while the names may be those of lesser-known fighters, discovering new stars is one of the joys of following mixed martial arts, because everyone already knows Khabib, and many are familiar with Poirier.

Looking at the entire UFC 242 Pay Per View on ESPN+, there are three really good fights to kick off the card, leading up to the Khabib vs. Poirier main event and the co-main, which features a pair of nasty, nasty kickboxers in Edson Barboza and Paul Felder. So here’s a quick rundown of the other fights on the main card. They’ll definitely get your blood pumping for the early start time — 2 p.m. Eastern Standard Time, 11 a.m. on the west coast.

Wanna know why you haven’t already heard of Mairbek Taisumov? Politics, that’s why.

Seriously, this guy is hardcore, and boy does he know how to finish a fight.

Truth be told, Taisumov, a Russian from Chechnya who fights out of Vienna, Austria, has never fought in North America because he’s never been able to obtain a U.S. visa. He’s attempting to handle that situation so that he can eventually bring his wicked knockout talents to the arenas of Las Vegas and New York, but for now, he’ll have to settle for a massive PPV in Abu Dhabi.

Standing in his way is Diego Ferreira, a more-than-serviceable lightweight who has gone 6-2 inside the Octagon, with four finishes.

While Ferreira is a legitimate threat in all aspects of mixed martial arts, the story here is Taisumov, who has won six straight fights in the UFC and is 7-1 overall in the Octagon. Collecting three fight-night bonuses during his run in the UFC, Taisumov once finished five consecutive fights via knockout. The man’s got some hands (and feet), and another win, on a stage as big as the UFC 242 main card on ESPN+, should put him on the cusp of the top-15.

Curtis “Razor” Blaydes and Shamil Abdurakhimov are actually known quantities in the UFC, as both have headlined events before, and this bout should be a cracker, even if it goes the distance.

Currently ranked fourth in the division, Blaydes is actually one of the strongest heavyweight wrestlers in the UFC. He’s 6-2 (with 1 no contest) during his UFC run, and both losses have come against Francis “The Predator” Ngannou.

Straight right from Blaydes stumbles Willis in round 2! #UFCNashville pic.twitter.com/nsP9BiGG0v

Blaydes was actually very close to a UFC title shot not too long ago before Ngannou put an end to a four-fight win streak that included victories over Mark Hunt and Alistair Overeem. In the Overeem fight, in particular, Blaydes showed how impressive his wrestling is, keeping the opposition grounded while lacing into Overeem’s forehead with some vicious, gnarly elbows.

Abdurakhimov, who is ranked ninth, is 5-2 overall in the UFC and currently riding a three-fight win streak heading in the UFC 242 Pay Per View main card.

He’s not necessarily the prettiest fighter of the lot, but he sure can take some damage and weather the storm, meaning Blaydes will have to bring his best into the Octagon on September 7.

Months before Conor McGregor fought Floyd Mayweather in the highest selling Pay Per View in combat sports history, UFC lightweight Islam Makhachev called for an “easy money” fight against Mayweather. His joke of a callout was perhaps not the best timed or most well received, but it just goes to show you how confident the 27 year old from Makhachkala, Dagestan is.

A close friend and training partner of Khabib Nurmagomedov at Eagles MMA, Makhachev is currently ranked fifteenth in the UFC lightweight division, and at 6-1 in the Octagon, he’s poised to be Russia’s next big MMA star, after Khabib decides to call it quits.

OUT OF NOWHERE!@MakhachevMMA opens up #UFC220 with a BANG! pic.twitter.com/gz3bS2lY6a

Like many of the Dagestani fighters, it all starts with the wrestling for Makhachev, who has improved his striking and submission games since debuting in the UFC in 2015.

The UFC has actually booked him in some pretty favorable slots, as this will be his fifth appearance on a Pay Per View event. The matchmakers don’t do that for any average fighter.

Facing Davi Ramos, a Brazilian who has won four straight fights, this is no gimme for Makhachev. Rather, it’s a very dangerous fight because Ramos basically has nothing to lose, while Makhachev must win, and must win impressively to earn a future fight against a top-10 opponent.

So make sure to check out these three fights, along with the UFC 242 main and co-main events on the ESPN+ Pay Per View platform.