Tiger Woods Says He Disagrees With Phil Mickelson’s Comments, Hasn’t Spoken To Him Since Controversy Began 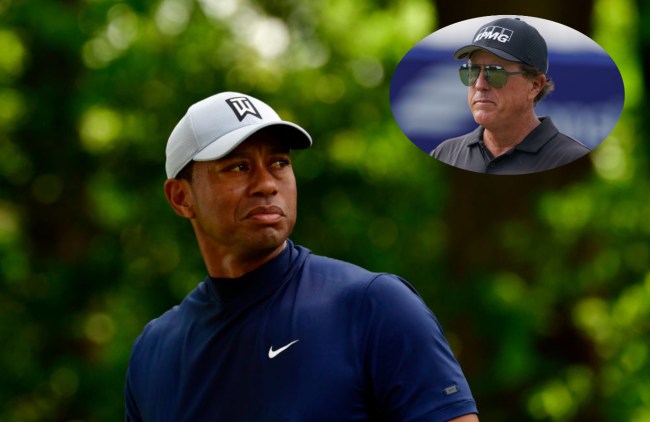 Defending champion Phil Mickelson isn’t in the field for this week’s PGA Championship, but he’s still the biggest story in golf this week.

Mickelson withdrew from the year’s second major last week as his break from golf continues. Lefty hasn’t played a tournament since February and hasn’t been heard from following his controversial comments about the PGA Tour and Saudi-backed LIV Golf came to light.

One man that will be teeing it up at Southern Hills this week is Tiger Woods. He was asked about Mickelson’s absence from this year’s PGA Championship during his press availability on Tuesday.

“It’s always disappointing when the defending champion is not here,” Woods told the media. “Phil has said some things that I think a lot of us who are committed to the Tour and committed to the legacy of the Tour have pushed back against. And he’s taken some personal time, and we all understand that.

Woods, like the majority of other PGA Tour players, is very much in the PGA Tour’s corner as the rival circuit LIV Golf is set to host its inaugural event in June. It’s safe to say that he didn’t like Mickelson’s comments calling out the Tour, referring to it as “a dictatorship, and his bad-mouthing of commissioner Jay Monahan.

“Some of his views on how the Tour could be run, should be run, [there’s] been a lot of disagreement there,” Woods continued. “But…as a professional, we miss him being out here. I mean, he’s a big draw for the game of golf. He’s just taking his time and we all wish him the best when he comes back. Obviously, we’re going to have difference of opinions, how he sees the Tour, and we’ll go from there.”

Woods and Mickelson aren’t exactly best friends given the fact they spent the better part of two decades as rivals on the golf course. Nevertheless, there’s an obvious respect there, so one might assume Woods has spoken with Mickelson during his hiatus from the game. That hasn’t been the case at all, however.

“I don’t know what he’s going through. But I know the comments he made about the Tour and the way that it should be run, it could be run and all the different financials that could have happened … I just have a very different opinion on that. So no, I have not reached out to him.”

Mickelson’s future in golf is a giant unknown at the moment. He could very well tee it up in the inaugural LIV Golf event outside of London in June, which at this point may very well be a safer bet against the idea we see him in another major or PGA Tour event in the future.