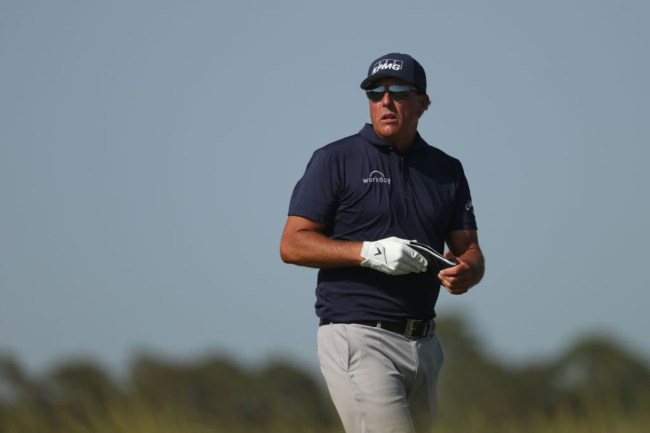 It seemed like there was a very real chance Phil Mickelson would make his return to golf at next week’s PGA Championship, but the six-time major winner officially withdrew on Friday.

The PGA Championship released the field for the tournament earlier in the week, and Mickelson’s name was on the list of players set to tee it up at Southern Hills, but that won’t be the case.

The PGA of America released a statement about Mickelson withdrawing stating that “we would have welcomed him to participate.”

Related: PGA Of America Doesn’t Sound Like It Wants Phil Mickelson And His ‘Circus’ To Show Up To The PGA Championship

Mickelson has gone dark following the controversial comments he made about both the Saudi-backed LIV Golf Invitational Series and the PGA Tour in February. He referred to the Saudis involved in the rival golf circuit as “scary motherf–kers” and referred to the PGA Tour as a “dictatorship,” among many other things.

Mickelson apologized for his comments a few days later while also announcing he’d be taking a break away from the game. Obviously, that break has been extended through PGA Championship week.

Lefty became the oldest player to win a major last year when he hoisted the Wanamaker Trophy at Kiawah Island.

It’s bad news that Phil Mickelson isn’t playing in the PGA Championship. No matter what else you think about the PGA Tour, LIV, Phil or anything else, it’s a bummer that he won’t be there to defend the defining win of his late career. Nobody wins here.

Man. Was thinking the best thing Phil could do is play—get out there, smile, thumbs up, get up and down from absolutely nowhere.

This is unfortunate on a few different levels. Crazy, crazy times in the golf world. https://t.co/BsTkSnPsoy

Wow!! Absolutely amazing this is where Phil is at with his career. https://t.co/xkBCIoQoQ7

Imagine a year ago today me telling you that Phil would win the PGA next week but that you’d be more surprised by what he did at the same tournament the following year.

Phil returning to golf (and the media) in the friendly confines of the first LIV event instead of the circus that would be the PGA presser does make sense.

But holy shit is that sad.