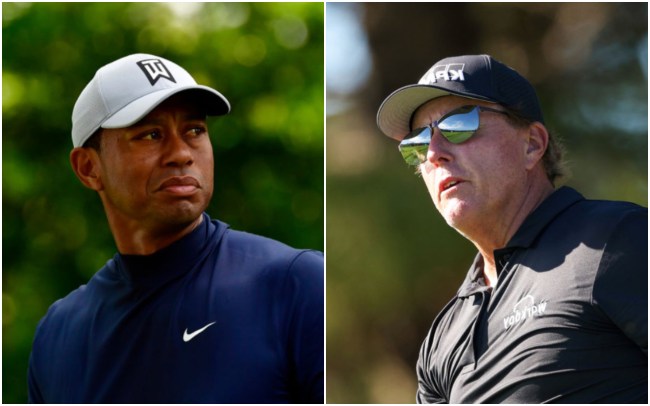 The field for the 2022 PGA Championship at Southern Hills has been announced, and there are two names that stand out on the list of names: Phil Mickelson and Tiger Woods.

While Woods’ name has been listed in the field for weeks now, the field was officially solidified on Monday afternoon. Mickelson’s name being in the field is a much bigger surprise.

Towards the end of April Mickelson’s agent announced that Lefty had registered to play in both the PGA Championship and U.S. Open. His agent also announced that the defending PGA Champ had filed a request with the PGA Tour to play in the inaugural LIV Golf event in June.

Another notable piece of the Mickelson puzzle, besides his drama-filled tie-in with Saudi-backed LIV Golf, was that his agent noted that he “currently has no concrete plans” to actually play in any of the three events. Now, however, it’s clear Mickelson plans to play in the major championship next week.

Woods flew to Tulsa, Okla. for a practice round at Southern Hills in April. His journey to scope out the course was heavily tracked and highly publicized as helicopters hovered over him while he practiced on-site.

Woods’ last PGA Championship victory came in 2007 at Southern Hills. The course has since been changed over the years, but it’s certainly a place Woods should feel comfortable.

The 2022 PGA Championship will get underway on May 19.

The golf world shared its reaction to the news of Mickelson and Woods being in the field for the 2022 PGA Championship:

They have to put them together correct?

PGA of America releases its Full Field List for next week's @PGAChampionship. Two guys stand out: Phil and Tiger. Because, you know.

This is a very good thing.