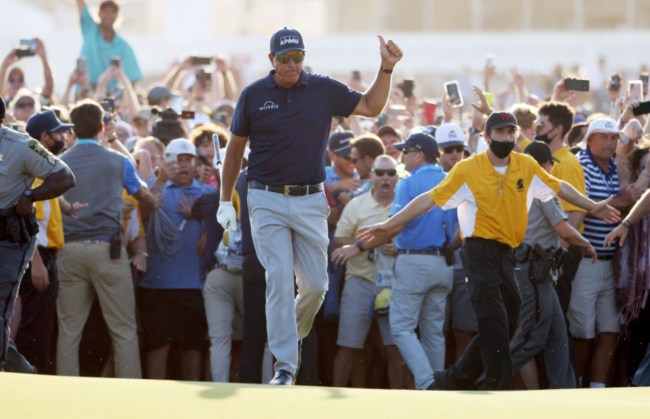 Phil Mickelson is listed in the field for the 2022 PGA Championship, but the PGA of America doesn’t exactly sound thrilled with the idea of him teeing it up at Southern Hills.

Mickelson, the defending PGA champion, isn’t on the best of terms with any of golf’s governing bodies. Lefty has been away from golf since his controversial comments about the Saudi-backed breakaway tour as well as both the PGA Tour and commissioner Jay Monahan.

Mickelson will eventually have to face the media and he’ll likely get hit with a barrage of uncomfortable questions. Waugh, speaking on the ‘Five Clubs‘ podcast, made it pretty clear he would rather see Mickelson squirm with the media anywhere but the PGA Championship.

“I hope what we can do is have that [the press conference] before the flag goes up,” Waugh explained.

“The idea is, if he does play, and if he’s able to and allowed to… he would certainly have to face the media. But I hope it’s Monday or Tuesday… What we’re trying to do is deliver a major championship, not a circus.”

It’s worth reiterating that Mickelson hoisted the Wanamaker Trophy just last year. In one year’s time, he’s gone from being regarded as a hero as the oldest major champion in history to a villain in many people’s eyes because of some not so wise words.

The PGA of America will be welcoming the Tiger Woods circus with open arms next week as he’s set to play in the year’s second major. It’s clear they’re not hoping to host a joint party with Mickelson, however.