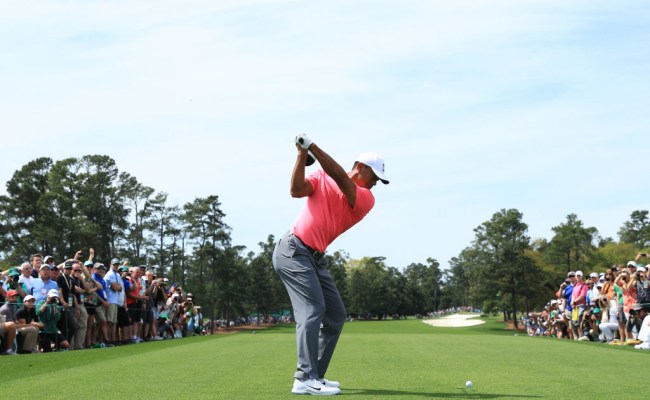 It’s Masters Week and in case you haven’t heard, Tiger Woods is back. The hype surrounding the 2018 Masters Tournament has already reached levels we haven’t seen since Tiger Woods was in his prime. The secondary ticket market has gotten so insane that Augusta National is cracking down and invalidating the tickets of lifelong ticket holders selling them on places like StubHub.

Tiger is a 4-time Masters champion and he’s taken home the Green Jacket on multiple occasions because he’s capable of navigating Amen Corner unlike anyone else on the planet. For proof of this, Tiger Woods sat down with The Masters video production team to film this clip where he takes us through, shot by shot, on how to survive Amen Corner:

As of this morning, Tiger Woods is tied with two other players as the secondary favorites to win The Masters this year with 12/1 odds to take home the Green Jacket (J Spieth 10/1, D Johnson 10/1, J Thomas 10/1, R McIlroy 12/1, T Woods 12/1, J Rose 12/1). A lot of people in the golfing world think Tiger’s odds are too high and they want to see him win a tournament before receiving such lofty odds but there’s a lot of reason to think that Tiger Woods can win The Masters this year. For starters, he’s strung together multiple Top 10 finishes this season so far and has been in contention to win a tournament on Sunday two weeks in a row in March. Also, Tiger knows the Augusta National course as well as anyone on the planet.

And it’s kind of crazy to think about, but I’d be willing to bet that almost every professional golfer on the planet could benefit from watching this video of Tiger Woods talking about how to play Amen Corner at The Masters. Even though we’re talking about the best golfers around this is still Tiger Woods letting everyone read his playbook. That’s privileged information that the public isn’t often privy to. So feel free to tweet this at any pro golfers out there (or follow me on Twitter at @casspa).