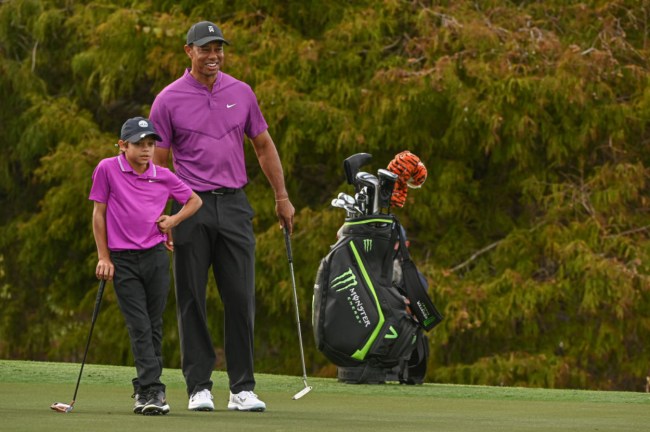 After months of suspense and unanswered questions, it’s official, Tiger Woods is making his competitive return to golf. He’ll be teeing it up alongside his son, Charlie, in the PNC Championship at The Ritz-Carlton Golf Club in Orlando December 18-19.

While his first start since his February car crash won’t be in an official PGA Tour event, it’s still an extremely positive and incredible sign that he’s able to tee it up at all. It’s also very cool that he’ll be making his return to golf with his son right there beside him.

“Although it’s been a long and challenging year, I am very excited to close it out by competing in the PNC Championship with my son Charlie. I’m playing as a dad and couldn’t be more excited and proud,” Tiger Woods wrote on social media.

As you might imagine, the golf world was ecstatic over the news that the big cat would be returning to the links:

Them: Tiger Woods will never compete again after his accident

Woods spoke to the media for the first time since his February car crash last week at the Hero World Challenge in the Bahamas. Tiger was the tournament host but didn’t play in the event, which was won by Viktor Hovland. He was spotted throughout the week practicing, however, on the back of the range during the tournament.

What makes the PNC Championship such a perfect event for Woods to test out his game is that he can ride in a golf cart during the event. He’ll also likely be taking a lot of his son’s drives off the tee, given the fact that Charlie is a good player that will be playing up a set, or two, of tees.

Tiger and Charlie teed it up in last year’s PNC Championship as well, which delivered some great moments.