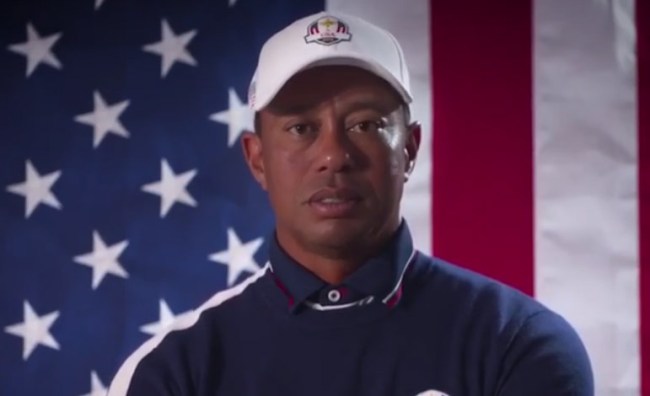 I’m just a man, on the internet, thirsting for Tiger Woods content. I’m not sure why I’m so invested in Tiger’s success, but I think it’s because I attach Tiger’s reign in the early 2000s to simpler times, times I’d get home from school and log on to AOL Instant messenger to spit unrefined game at Kelsey Henderson. Now I have to pay taxes and shit and my brain thinks that if Tiger can capture the success he had in his prime, I too can go back and change the course of my life.

Point being, I was very happy when Tiger secured his first PGA Tour win in five years, and if the TV ratings are any indication, you were too.

Tiger’s win made him emotional, as its been a long uphill battle. One could only expect that when he met up with his US Ryder Cup teammates later that day, he would be mobbed like a baseball player who just hit a walk-off approaching home plate. Not the case.

After Woods finished his media obligations, USA’s Ryder Cup captain Jim Furyk got the go-ahead from caddie, Joe LaCava, to follow through with a prank he’d organized involving the rest of Team USA.

LaCava regaled the tale on Ryder Cup Radio on Sirius/XM:

“I ran into Jim Furyk and he said, ‘We were thinking about giving Tiger the cold shoulder like they do in baseball when the guy hits his first home run.'”

“He asked, ‘Do you think Tiger will be OK with that? I was like, ‘Of course he would. He’s got a sense of humor.'”

Tiger shows up about a half-hour later and is looking for some high-fives from everybody and they wouldn’t give him the time of day. They weren’t even looking at him, they all have their backs to him.”

After a couple painful minutes, Tiger’s teammates broke character and mobbed him in celebration.