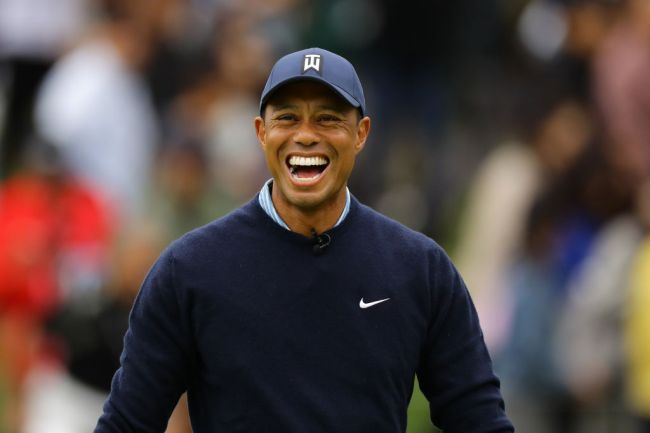 Tiger Woods has been wearing some interesting threads throughout his legendary career. From the salmon-colored striped shirt and straw hat combo at the 1994 U.S. Amateur Championship to his legendary red mocks on Sundays, the man has been changing the golf attire game for decades.

While some may assume that since he’s a golfer, and arguably the best to ever pick up a club, he’d fall somewhere in the category of stereotypical golfer attire away from the course as well. You know the look, some slacks or jeans with a golf shirt on and a hat, but Woods doesn’t roll that way. He’s all about being as comfortable and casual as possible away from the course and as a Nike athlete, he’s got no shortage of athleisure wear to choose from.

Woods’ casual style was on full display at Super Bowl LV on Sunday as he showed up in a backwards hate, a Nike windbreaker, some black shorts, and some sneakers. When you’re Tiger Woods, you can just do that sort of thing.

Never know who you’ll see at the Super Bowl! pic.twitter.com/Yvx1XYejNA

At the end of the day, Woods is there to enjoy himself and watch a football game. If the man wants to rock shorts and some tennis shoes, he can have at it.

He looks like he just got done taking the kids for a spin on the boat and someone called him up and said ‘hey man, I have an extra ticket to the game’ and he jumped on the opportunity last minute. That, or he was working out and lost track of time. Whatever the case may be, you have to respect it.

The Super Bowl was limited to 33% capacity with tickets going for an absurd amount of money, so Woods knew he was going to run into some rather important folks at this thing, but he simply didn’t care.

I’m liking the energy Woods is putting out there. Let’s all make 2021 the most casual year ever. Shorts and sneakers will do, they’ll always* do.

*if you’re net worth is around $1 billion.