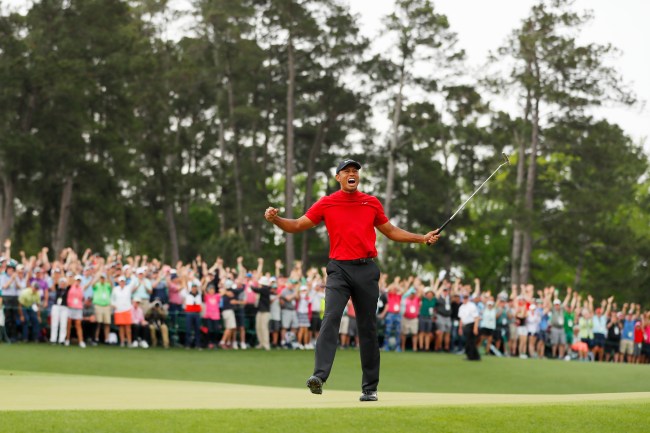 Tiger Woods winning The Masters yesterday brought a big ol’ smile to the entire sports world after the now 15-time major champ showed that he’s, in fact, back. Whether it was swelling up after seeing Tiger sink that final putt to win his first major since 2008, or when he walked off and hugged his kids, or when he sat there and got his latest green jacket draped over his shoulders, the entire moment was something that most sports fans will always remember being part of.

To pay tribute to the incredible sports comeback — one which Stephen Curry called the “greatest” — Sports Illustrated is doing something that it rarely does when printing a cover: not have any descriptive text on it. Yep, the print issue of the longtime sports magazine is honoring Tiger Woods in a way like none other after he won The Masters, which, of course, is a tradition like none other. Here’s a quick glimpse of what the latest SI with Woods on it will look like.

COVER STORY: It was impossible. And then it happened. @TigerWoods is a major champion once again https://t.co/OcphQ4sZnb pic.twitter.com/7qwotSKvje

Just how remarkable is Tiger Woods’ latest victory at The Masters? So much so that the wordless Sports Illustrated cover will become only the third ever to be printed as such, with the newest issue joining the ranks of the March 3, 1980 issue, which featured the U.S. men’s hockey team upsetting the Soviet Union in the “Miracle on Ice” at the 1980 Winter Olympics, and the August 21, 1995 issue, which was when SI paid tribute to New York Yankees legend Mickey Mantle, who died at the age of 63 a week prior.

Considering Tiger Woods first played August National Golf Course as an amateur in 1995, won it for the first time in 1997, went back-to-back in 2001 and 2002 — something only two other golfers have ever done — and, at 43 years old after all that he’s physically and emotionally had to go through, just capped another Masters victory, it’s awesome to see Sports Illustrated give the event a special edition. So who’s going out to buy one so they can frame it to put on their wall?