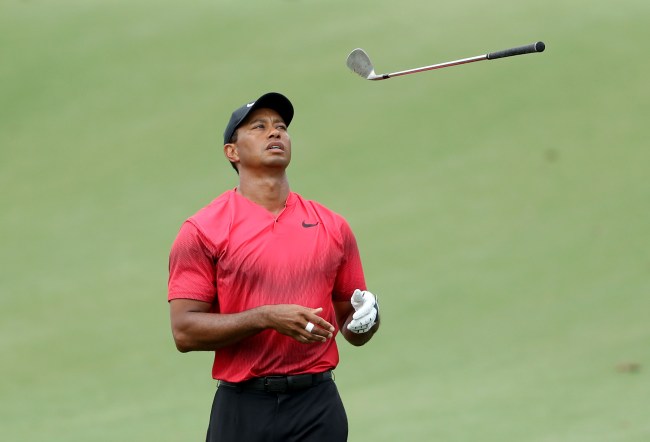 As Tiger Woods preps for the weekend’s U.S. Open at Winged Foot — a horrendously difficult course that may see the winner shoot over par — he was recently asked about some of the other major courses that he’s played that have presented a daunting challenge. Considering Woods missed the cut the last time Winged Foot hosted the U.S. Open in 2006, it’s not too surprising to hear the 15-time major champ put the course on his most difficult list.

But Tiger didn’t stick with the status quo and only suggest Winged Foot was the one that presented the biggest challenge. He was kind enough to give three courses that he found to be the most difficult.

“Well, I think it’s (Winged Food) right up there next to Oakmont and I think Carnoustie as far as just sheer difficulty without even doing anything to it,” Woods said during a pre-tournament news conference Tuesday. “I think those three golf courses, they can host major championships without ever doing anything to them.

“This one or Oakmont here is either one or two.”

Damn, considering the amount of golf Tiger Woods has played in his lifetime, and at all sorts of different courses, it’s incredible to hear him suggest Winged Foot is one of the top-2 most difficult. That doesn’t necessarily exude confidence if you’re a sports gambler looking to make some money off Tiger winning this weekend. Then again, Woods isn’t the only one finding Winged Foot hard AF, as other players in the U.S. Open field have talked about how challenging the course is, too.

Woodland said without spectators, it can be difficult to find a ball that travels into the rough. He played his first practice round on Saturday and said he couldn’t find a ball when his caddie simply tossed it back to him while working on his chipping.

“We didn’t find it until we stepped on it,” he said. “The golf ball can disappear pretty quickly.

“The fact that we have marshals is going to help. Usually, if you hit it outside the ropes too, you’re hitting it in the crowds and you got some trampled down lies. We don’t have the benefit of that this week. So you’re going to have to drive the golf ball in play.”

So, yeah, whether it’s Tiger Woods, Gary Woodland or any other golfer in this year’s U.S. Open field, fans should be ready for higher than normal scores; which only means it should be a helluva crapshoot and a complete toss up when trying to figure out the winner.