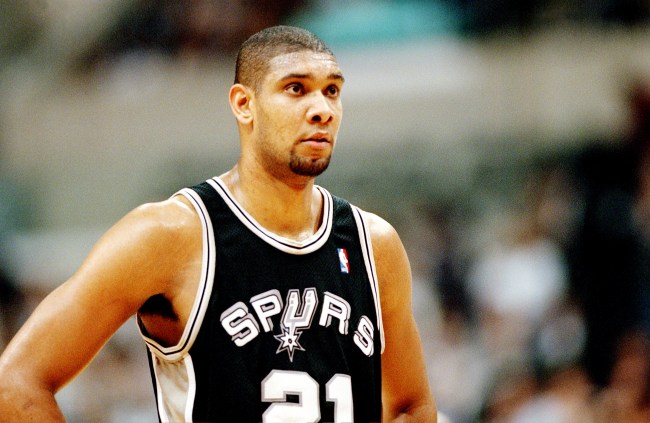 If there was ever a player to be unaffected by Michael Jordan’s iron fist over the entire NBA in the 90s, it had to be Tim Duncan.

The Big Fundamental entered the league in the midst of the Chicago Bulls second three-peat, fresh off a legendary college career at Wake Forest.

After Duncan’s rookie season in 1998, a debut in which he secured Rookie of the Year, he participated in an interview with a young Dan Patrick in which he revealed that he was uninterested and unimpressed with Michael Jordan.

Duncan: But Jordan’s Jordan. I’ve always respected him but I’ve never been a fan of his.

Patrick: Why aren’t you a fan of Jordan’s?

Duncan: Because everybody else is.

Patrick: Oh, so you don’t like Michael Jordan because everybody else does.

Patrick: You respect him. You just don’t like him?

Duncan: I’m just somebody that isn’t that impressed by him. There really isn’t anybody in the world I’m impressed with.

Tim Duncan is lucky he never faced Michael Jordan in the Finals.

MJ would have been on a warpath 😂 pic.twitter.com/UsJBUgosvd

Duncan wasn’t sold on Jordan, but later in the interview admitted that he loved watching Shareef Abdur-Rahim play. Shareef played 12 seasons in the NBA, but made only one All Star appearance.

Some people are totally immune to the hype.

"He didn't talk in sentences, he hit you in phrases. No gangsta shit." pic.twitter.com/ZdAMlkEOt4