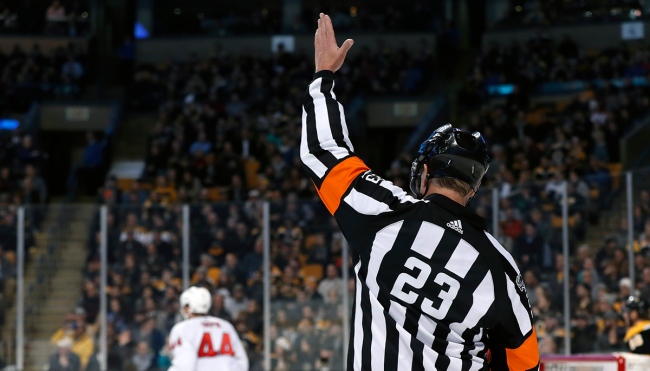 On Tuesday night, the NHL found itself with a bit of a scandal on its hands after referee Tim Peel appeared to admit to sending Predators forward Viktor Arvidsson to the penalty box for the weakest reason possible on a hot mic that captured him saying “It wasn’t much but I wanted to get a f—n’ penalty against Nashville early in the” before the audio was abruptly cut off.

What appeared to be some sort of make-up call came after Arvidsson supposedly tripped Red Wings defenseman Jon Merrill early on in the second period, but it doesn’t take a hockey expert to realize the latter was sent to the ice as a result of some inadvertent contact after the two men got their legs tied up.

It didn’t take long for the NHL to announce it was “investigating the incident,” and while I can understand why hockey fans eagerly deployed their torches and pitchforks in the wake of Peel’s comment, I’m honestly not sure how anyone who considers themselves a genuine hockey fan could be honestly shocked by his admission if they’ve been paying a modicum of attention to how the league’s officials have operated forever.

NHL director of hockey operations Colin Campbell would not comment on one of the referees appearing to admit to an even-up call in the Nashville-Detroit game tonight, but did acknowledge, "Investigating this incident."

This specific call is interesting when you consider it was the first penalty the Predators had been hit with, and labeling it a “make-up” call is kind of a stretch when you consider the interference call against the Red Wings that led to Nashville scoring a power-play goal in the first period seemed to be pretty clear cut. It’s also worth noting NHL players who were surveyed by The Athletic last year said Peel was one of the top five refs in the league, but it appears he won’t be on the ballot at all next year when you consider the NHL apparently decided to fire him on Wednesday morning.

Referee Tim Peel no longer will be working NHL games now or in the future. https://t.co/mrnDc61W5P pic.twitter.com/tKsg2SwGh8

I can’t really say I blame the NHL for taking that particular course of action, but in doing so, it essentially made Peel the scapegoat for a problem that has always plagued the league, as the fact that refs tend to be a bit liberal with their whistle after realizing they screwed up by blowing it to punish the other team for no real reason earlier in the game is the worst kept secret in hockey (and, if we’re being honest, the sports world as a whole.)

Peel might have violated the Golden Rule of committing a misdeed by admitting to doing one despite knowing there was a microphone attached to his uniform, but when you consider the league presumably has access to everything its officials say over the course of a game, it’s almost impossible to believe that there haven’t been other refs who’ve made similar confessions but managed to avoid having them broadcasted to the world.

The league may have assuaged the angry mob by canning Peel, but unless it actually does something to address the fundamental issue that led to his firing, the decision is the equivalent of putting a Mickey Mouse Band-Aid on a gaping wound that will continue to gush blood unless its referees begin to face similar discipline for raising their arms when the situation obviously doesn’t call for it.