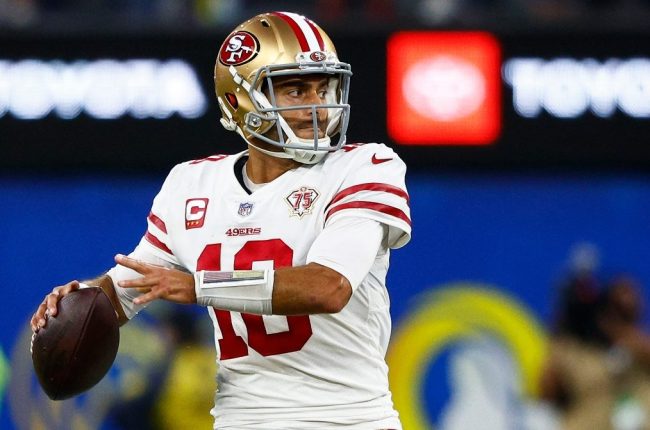 The NFL season is nearly upon us and Jimmy Garoppolo has yet to find a new home. With the San Francisco 49ers handing the reigns to Trey Lance, rumors continue to swirl around Garoppolo’s departure. One of those rumors has the Tennessee Titans acquiring the veteran quarterback but the fanbase just isn’t having it with Ryan Tannehill under center.

During an appearance on The Pat McAfee Show, Jordan Schultz name-dropped some teams he claims are interested in Jimmy Garoppolo. One of them is the Tennessee Titans. Even though Schultz claims the franchise is interested in the 49ers quarterback, the fanbase isn’t buying it at all.

"I heard Tennessee had talks about Jimmy G but that was before Malik Willis had a pretty good preseason" ~@Schultz_Report#PMSLive pic.twitter.com/6VhizAgWa6

Considering Ryan Tannehill is the starting quarterback and is good in his own right, it’s hard to imagine the Titans pulling the trigger in acquiring Garoppolo. Additionally, Malik Willis played well in the final two games of the preseason, providing plenty of hype for Titans fans to be excited about.

For that reason, the fanbase shot down these rumors immediately. Check out what Titans fans had to say about the rumors.

Jimmy G over Tanny? What is this guy smoking?

This dude said the Niners were in on Deshaun Watson. Fraudulent.

Just speaking financially, the Titans trading for Jimmy Garoppolo just isn’t fathomable. Additionally, why would Tennessee bring in another veteran quarterback when they already have Tannehill leading the way? Rumors are rumors, but it would be extremely shocking for this franchise to bring in Garoppolo this year.