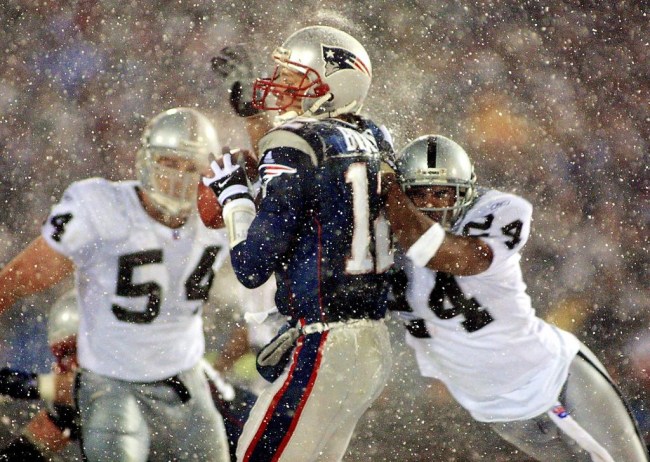 There may be some people out there reading this who weren’t alive to remember the time when the New England Patriots were one of the most hapless franchises in the NFL—a time before they had a guy named “Tom Brady” at the helm.

Expectations were pretty low entering the 2001 season and got even lower when Drew Bledsoe was sidelined due to injury and it’s safe to say people didn’t exactly anticipate much from the sixth-round draft pick from Michigan,

As we all know by now, Brady managed to exceed the low expectations set for him and would eventually lead the Patriots to their first Super Bowl victory, marking the start of an almost two-decade-long dynasty that shows no signs of ending any time soon.

However, it’s safe to say they got a little bit of help along the way.

In order to get to the Super Bowl in the first place, New England had to overcome the Raiders in the divisional playoffs during a snowy contest in Foxboro—a showdown that quickly went down in history as The “Tuck Rule” Game.

The Patriots found themselves in desperate need of a score with under two minutes remaining in the fourth quarter and it looked like all hope was lost when Brady was sacked and appeared to fumble a ball that was recovered by Oakland.

However, the referees ruled his arm was going forward and deemed the result of the play an incomplete pass, which allowed the Patriots to tie the game before coming away with the victory in overtime.

Brady has never really addressed whether or not he thought the refs made the correct call and stonewalled Charles Woodson when he was asked about it earlier this year.

2001. Tuck Rule play.@CharlesWoodson asks @TomBrady straight up: "Was it a fumble?"

Now, it appears he’s finally decided to break his silence, as we were recently treated to a preview of Peyton Manning’s ESPN show where Brady responded “Hell yeah” when asked about whether or not he’d fumbled the ball and admitted he wasn’t attempting a pass.

Preview of Brady and Peyton together on "Peyton's Places"

Brady: You couldn't hear anything

Manning: Yeah, we didn't pump in noise either

Brady: You're full of shit

I’m sure Raiders fans aren’t going to be too thrilled about this but at least they’ll finally get some closure.