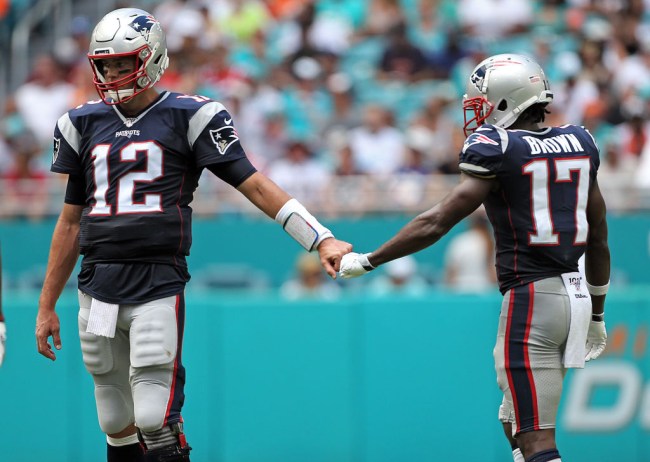 It’s safe to say Tom Brady was pretty amped to learn the Patriots signed Antonio Brown after the wide receiver was released following a tumultuous stint with the Raiders, as the legendary quarterback reportedly told him he could crash with him and Gisele until he found a place to live.

It initially appeared Brady had found an offensive weapon to fill the Gronk-sized hole that was left in his heart but the partnership was shortlived, as Brown only played a single game for New England before he was sent packing by the team after multiple sexual misconduct allegations came to light.

Brady chose his words very carefully when he was asked about Brown’s situation shortly after the Patriots parted ways with the embattled player, but based on a private conversation that eventually leaked, the QB didn’t see eye-to-eye with Robert Kraft concerning the matter.

Brown initially took his release in stride before deciding to reverse course a bit and fire a shot at Kraft over his alleged love of legally-questionable massages, but earlier this week, he attempted to make amends when he posted an apology to the Patriots owner that managed to earn a like from Brady on Instagram.

Brady didn’t hide his displeasure with the current state of New England’s offense after they lost to the Ravens last weekend and there was plenty of speculation that the quarterback was lobbying for Brown to return to the team (LaVar Arrington even went as far to suggest he was the one who told Brown to make amends).

However, Brady denied he meant anything by the gesture while speaking with The Boston Herald and explained his motivation, saying:

“I liked him. We had a great rapport when we were here. I’m trying to support him to be the best person that he can be, that’s all…

For me, I’m just at this stage of my career, I’m 42 years old. I want to help everybody I can that I come across in this locker room, my friends, to be the best they can be. And how I can support them the best way possible.

I feel like I have a lot of experience. Part of being a leader in this locker room is trying to help people understand the challenges of being in the positions that they’re in….it’s my responsibility to convey to them what it takes to have a great, successful career.”

Brown has previously said he’d be willing to play for the Patriots again if given the chance, and based on the evidence at hand, it seems like Brady would be happy to have him back.

However, something tells me Kraft might need a little bit of convincing.