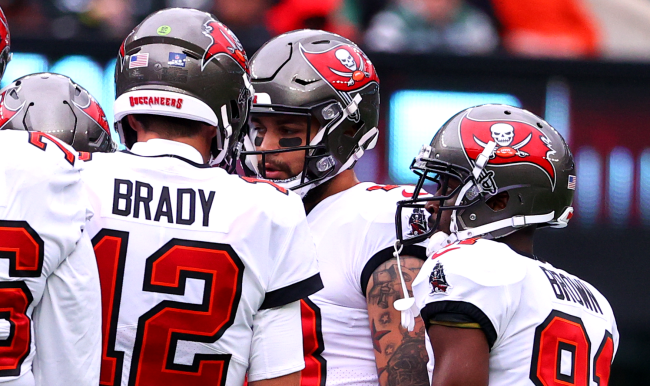 Of the dozens and dozens of people who weighed in on Antonio Brown’s abrupt departure from the Tampa Bay sideline during Sunday’s game versus the Jets, Buccaneers quarterback Tom Brady took one of the most compassionate stances.

Brady, when asked about the situation after the game by the media, said, “We all love him and care about him deeply,” adding, “I think everyone should be compassionate and empathetic toward some very difficult things.”

He didn’t get into what those “things” may be specifically, but on Monday during his appearance on the Let’s Go podcast he did shed a little more light.

“I’ve known Antonio for a couple years now, you know, pretty closely,” said Brady. “We’ve obviously been teammates and I would just say I love him, I care about him, and I have a lot of compassion. I have a lot of empathy for the things that are happening in his life. So it’s a lot of challenges we all face from time to time.

“I think the best thing is to have a support system, even outside of football, because again, yeah, we are football players, we’re athletes, we give everything we can on the field, but we also have off field lives too and I’m going to continue to do everything I can to try to be a great friend and supportive to Antonio and the things he’s going through.”

Antonio Brown remains in New York, as he is currently courtside at the Nets-Grizzlies game in Brooklyn. pic.twitter.com/NhkLUMtEab

Brady continued, “I think about Ricky Williams and I think about Calvin Ridley this year, a young player for the Atlanta Falcons that stepped away from the game. And, again, I don’t think anyone’s living in anyone else’s shoes. So you don’t necessarily know what other people are going through. All you do is, you show up to work every day and you try to do your job. And you obviously recognize there’s a lot of teammates in a locker room and you build relationships with those teammates and I’ve done it for a long period of time for a lot of years. And you get to know people, you really try to do everything you can to help them.”

He also mentioned Simone Biles withdrawing from the Olympics as another example of athletes dealing with mental health issues.

From @NFLTotalAccess: It started in the halftime locker room for #Bucs WR Antonio Brown, continued on the sidelines when he refused to enter the game, and then he was done. The latest on the AB situation, with Tampa Bay not yet releasing him (but they will). pic.twitter.com/xT3oEAeXr2

Brady says he didn’t know what happened with Antonio Brown until after the game when he saw video of Mike Evans, O.J. Howard and coach Bruce Arians talking to Brown, saying “it was just a very difficult situation for everybody involved.”

“Antonio is a great player and extremely talented player and we all want the best for him, we really do,” Brady added. “I think there’s a very supportive group of teammates and coaches, and it’s just a very difficult situation for everybody. I don’t think there’s a great way to sum anything up other than to say that he has a lot of supportive teammates. And I’m certainly one of them. I love him, and I’m always here for him.”