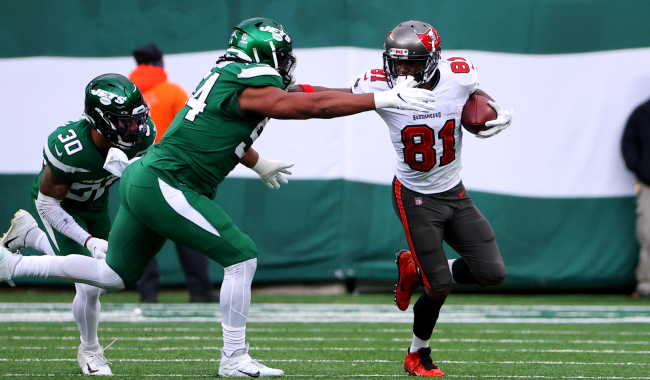 The real story surrounding Antonio Brown’s abrupt departure from the Tampa Bay Buccaneers’ sideline on Sunday is still yet to be fully told.

Buccaneers’ head coach Bruce Arians has shared what he claims to know. Antonio Brown hasn’t said anything of substance yet, however.

Numerous others, like Antonio Brown’s brother, Le’Veon Bell, Ryan Clark, Tony Dungy, Terry Bradshaw, and Tom Brady have all weighed in with their opinions, but no one knows the real truth.

Sources have told Pat McAfee that Antonio Brown felt the Buccaneers didn’t have his back during his suspension and his relationship with team had changed when he returned.

PER SOURCES: Antonio Brahn felt as if he didn't get enough respect or backing during his suspension from the Bucs.. as soon as he came back to the team it was a completely different relationship#PatMcAfeeShowLIVE #GoBucs pic.twitter.com/Ps1vtfwaAS

Other sources have told Ian Rapoport that AB was told to go back into the game by Arians, but felt that he was too injured to continue playing. Arians then allegedly threw him off the sidelines.

“What he told the staff, from what I understand, is that he was not going into the game because, in his mind, he did not feel he was healthy,” Rapoport said. “The response then from the offensive coaches and from Bruce Arians was, ‘If you are not gonna go into the game when we tell you to go into the game, then you cannot be here.’ At that point, they threw him off the sidelines and then cut him from the team.”

Arians said he had no idea that Brown claimed to be too injured to play.

“I don’t know that he was [injured],” Arians told the media after the game. “It’s pretty obvious what happened. He left the field and that was it… We had a conversation and he left the field.”

On Monday, video which supposedly shows Antonio Brown’s last interaction with quarterback Tom Brady right before the drive that resulted in him taking off his gear and leaving the stadium.

This seemed to be his last interaction with Brady right before the drive that resulted in him leaving… Everything seemed fairly calm pic.twitter.com/i1NlwZ8kYv

Everything looked to be fine based on that video, but TB12 obviously has a different relationship with Brown than the Bucs’ coaching staff does.

In their defense, AB did look good running routes prior his meltdown.

This is route running at its finest. Ridiculously good @AB84 pic.twitter.com/ds1ocGrd9j

Brown has yet to make any comment about why he quit and left the field in the middle of Sunday’s game.