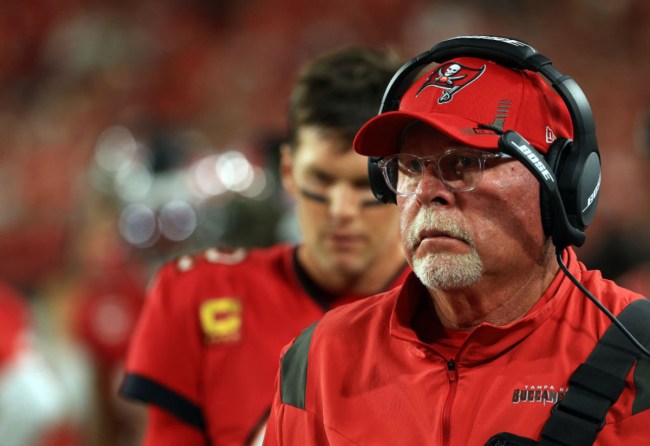 We still don’t know exactly what went on between Antonio Brown and the Tampa Bay Buccaneers prior to his meltdown against the Jets in which he left the stadium during the middle of the game. It’s truly fitting that we don’t know the exact details given just how bizarre the scene was at Metlife Stadium on Sunday.

After the Bucs’ 28-24 win over the Jets, head coach Bruce Arians didn’t want to talk about Brown’s exit at all. He shut down any questions about Brown but did confirm that he’s no longer a member of the team. Tom Brady didn’t exactly give any details either, and instead offered up his support telling the world that he loves Brown and that everyone “should be compassionate.”

On Monday morning, the first real report about what may have happened came via Ian Rapaport. He suggested that Brown refused to go back into the game because he felt he was too injured to play and the Tampa Bay coaching staff kicked him off the sidelines.

During his Monday press conference, the Bucs’ head coach explained he still doesn’t know what happened prior to Brown’s meltdown. When he was point-blank asked what he said to Brown that set him off, Arians claimed he didn’t know.

“You’d have to ask him, brother. I don’t have a clue,” Arians told Greg Auman of The Athletic. “I don’t know that he was (injured). It’s pretty obvious what happened. He left the field and that was it. … We had a conversation and he left the field.”

Bruce Arians on Antonio Brown: "Wish him well, I hope if he needs help, get some. It’s very hard because I do care about him." #GoBucs

We honestly may never know the actual events that transpired that led Brown to leave mid-game.

Brown’s younger brother suggested that incentives played a role in his exit.