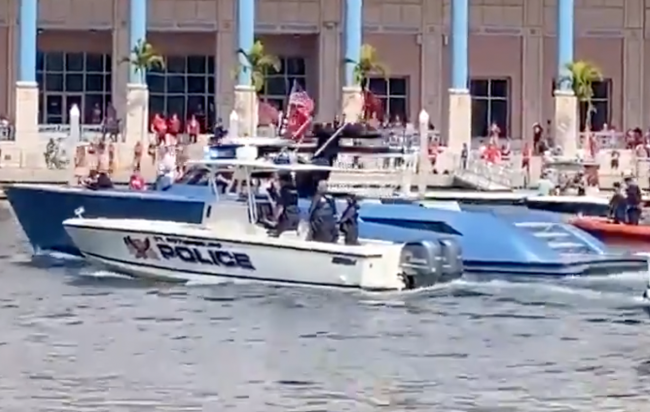 Tom Brady has traditionally celebrated winning the Super Bowl by hopping aboard one of the duck boats that parade around the streets of Boston before making their way into the Charles River whenever one of the city’s teams take home a championship, but things obviously look a little different this year after he secured the seventh Lombardi Trophy of his career as a member of the Tampa Bay Buccaneers.

Earlier this week, the Bucs announced Tom Brady and the rest of the team would be following in the footsteps of the Lightning by taking to the Hillsborough River for a floating Super Bowl parade, as encouraging fans to pack shoulder to shoulder in the city’s streets is obviously a fairly ill-advised idea given the current state of the world.

The festivities officially kicked off earlier this afternoon as members of the franchise gathered to make their way onto the various vessels that will be transporting them around the parade route, including Rob Gronkowski, who will be sharing a water taxi with a few of his teammates on what promises to be the center of this year’s party—especially when you consider Gronk has apparently told EMTs to get an ambulance ready based on what he has in store for his body.

You guys…@RobGronkowski , @MillerTime___10 @MikeEvans13_ @CGtwelve_ and Cam Brate are all on the little Water Taxi. Already the loudest “, rowdiest boat. This thing may capsize before 2 p.m. pic.twitter.com/XQaGQOLikO

.@RobGronkowski just said someone might need to take him out of here on an ambulance. pic.twitter.com/EO5AP1Igfk

Prior to the start of the procession, a reporter attempted to figure out who Brady would be riding along with before learning the G.O.A.T. would be making the rounds in a boat reserved for him and only him.

"Brady's on his own boat." pic.twitter.com/mEmH4NXkW9

it didn’t take long to discover he’d decided to use the occasion to flex a bit when he rolled in on “Viva a Vida,” the custom watercraft clocking in at over 40 feet that he dropped an estimated $2 million on last year (a development that didn’t sit very well with more than a few people when you consider his company received almost $1 million in PPP loans in 2020.)

At this point, it’s clear the 43-year-old legend could not care less about what people think about him, and it’s honestly hard to blame him for stunting like this when you consider he’s earned the right to do basically whatever the hell he wants for the rest of his life while waving at his haters along the way.

If what we’ve seen so far is any indication, the Buccaneers’ Super Bowl parade looks like it’s going to be an incredibly entertaining affair, so be sure to keep checking in throughout the rest of the day (and keep an eye out for any sportsbooks that might be offering a prop bet on Gronk’s potential hospitalization.)