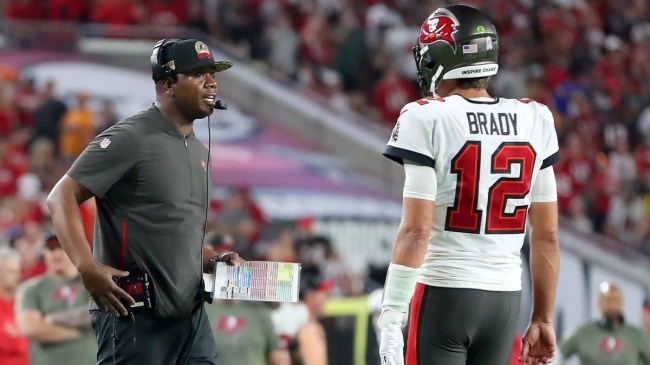 Tom Brady looked like Tom Brady for perhaps the first time all season on Sunday. While Brady’s 36-of-58 for 280 yards and one touchdown stat line may not show it, the result was what really mattered.

But that’s been the exception rather than the rule for Brady and the Bucs this season. Tampa Bay is just 4-5 on the season (somehow still in first place in the NFC South) despite the fifth-best scoring defense in the league. Brady and the offensive have regularly sputtered. The seven-time Super Bowl champ has thrown for 2,547 yards, but only 10 touchdowns against one interception. Tampa Bay ranks 25th in the league offensively wih an average of 18 points per game.

And now Brady is letting fans know why exactly that is.

Brady spoke about the big win and his team’s issues on the latest episode of his “Let’s Go” podcast on Sirius XM. One of the key issues that he harped on regarding Tampa Bay’s struggles is its inability to consistently give a good effort.

“There’s definitely some things we do well, there’s a lot of things we don’t do well and I think too much of good, bad, good, bad, good, bad, leaves you average and no one’s trying to be average,” Brady said. “If you want to be a great team, you’ve got to be way better than average. So correcting our mistakes, improving our effort, which, that’s probably the most embarrassing part of our team is our effort level on game day, and that’s something we better fix.” – via CBS Sports

Brady’s comments aren’t particularly surprising. His competitiveness and work ethic are the stuff of legend. But it’s easy to wonder if his teammates fell the same way and how they’ll respond to the critique. Most Bucs players have fallen in line with Brady thus far, but if the troublesome run continues it’s hard to see that lasting.