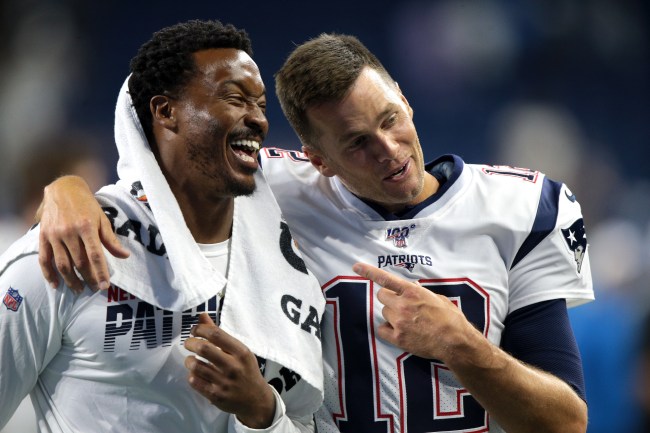 Add Demaryius Thomas to the list of people victimized by Antonio Brown. The veteran wide receiver was traded from the Patriots to the Jets prior to Week 2 to make way for Antonio Brown, who ultimately ended up on the unemployment line two short weeks later.

Now, after a decade of elite play in the NFL, the five-time Pro Bowler must sludge through a miserable season with the 1-5 New York Jets in the twilight of his career.

And for that, Tom Brady is sorry.

Thomas and Brady became fast friends during Thomas’ cup of coffee in New England, and before the Patriots humiliated the Jets on Monday Night Football, the Patriots quarterback gave the 31-year-old a gift to bury the hatchet.

Check this out.#Patriots QB Tom Brady handing his former teammate and now #Jets receiver Demaryius Thomas a gift.
What's in the box?
DT had some strong words about being cut, re-signed and then traded calling it "Insulting, for sure” and a "waste of time for me." pic.twitter.com/6KOsA5D15c

Thomas previously went on the record saying the Patriots did him dirty by releasing him during final roster cuts, re-signing him to a one-year contract, only to trade him to a JV team within the division.

“It was insulting, for sure,” Thomas said. “Once I got cut, I could have just come here (to the Jets) and not stayed there and re-sign. When they re-signed me, I was thinking that I was good. Two weeks later, I was gone. So, it’s like, ‘Why did I waste my time?’ Because at the end of the day, it was kind of a waste of time for me.”

I’m a Patriots guy so I may be a little biased here, but close your eyes and try to picture Ben Roethlisberger doing something like this…

My brain just broke trying to imagine it.