An Angry Tom Brady Slammed His Helmet, Punted Ball, And Cursed At His Teammates In Practice 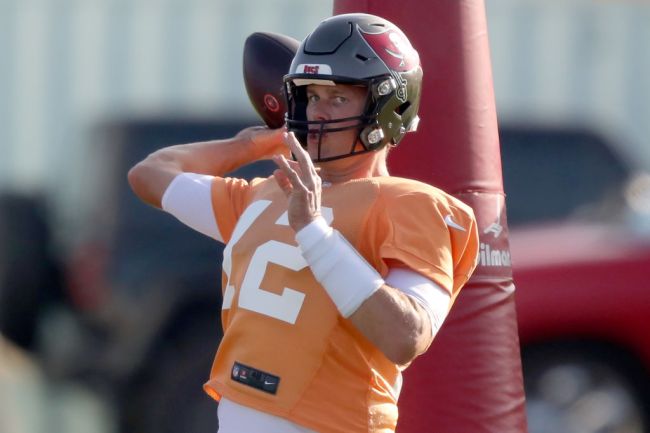 Bucs are only a week into training camp and Tom Brady is already in midseason form when it comes to holding his teammates accountable.

According to various reports Brady was extra fiery on Sunday afternoon.

After getting sacked on a play in practice Brady reportedly slammed his helmet on the ground.

Brady is (would be) sacked on the play by Anthony Nelson. The next play is an overthrow down the field intended for Miller. Brady then slams his helmet on the ground. #Bucs

A few minutes later a frustrated Brady punted the ball 40 yards after he couldn’t find any open receivers down the field.

Brady was apparently not happy with his wide receivers and proceeded to curse at them at the end of the drive. p

Bucs head coach applauded the team’s effort on Sunday but criticized the decision-making from of the young wide receivers on the team.

“I’m really pleased with the effort,”. “We’re working extremely hard, two days in a row. Fast. But I’m not seeing the smart. We’ve got to be a much smarter football team. After watching (Saturday)’s practice, we made way too many mental errors.

“Same thing (Sunday) with guys getting lined up, especially those young wide receivers, and it’s time for them to grow up. Can’t ask any more of our football team in terms of work. Work, speed of practice and all those things. Very, very competitive, but we’ve got to become a smarter football team quick.”