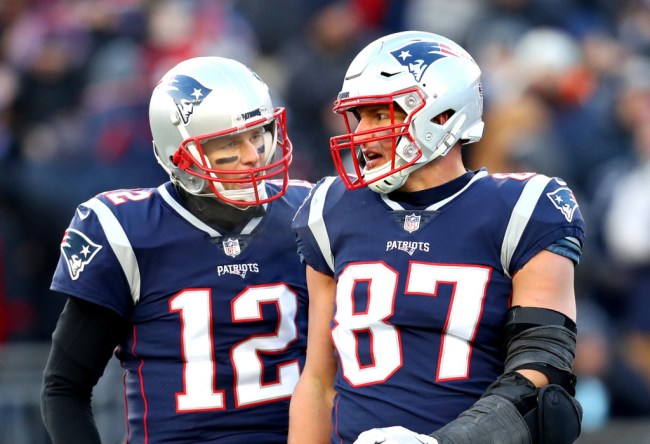 Rob Gronkowski officially announced he was retiring from the NFL last spring after a career plagued by injury, but much like many people didn’t believe Andy Kaufman actually died when that news broke, there was a ton of speculation concerning whether or not the tight end was serious about hanging up his cleats.

Thanks to his affinity for ripping off his shirt in public places, we know that Gronk is still very much in football shape and previously said he’d only need a month if he wanted to mount a comeback.

Last week, Robert Kraft informed the world that Gronkowski hadn’t officially filed his retirement papers, which seemed to suggest he may have left the door open for a return.

However, there’s one person who isn’t buying the rumors: Tom Brady.

Last month, the quarterback made it clear he didn’t think Gronk will be back on the field at any point in the immediate future, and on Monday, he doubled down on his comments during his weekly appearance on WEEI.

Here’s what he had to say via Pro Football Talk:

He seems to really be doing a lot of great things. He knows how I feel about him. I want what is best for him. He’s the only person that can make those decisions. I don’t lobby for those things.

I think he’s a very special guy. He’s just in a different phase of his life.”

Based on his broadcast debut last week, that new phase would seem to involve seeing what he can get away with saying on national television and I can’t say I hate it.