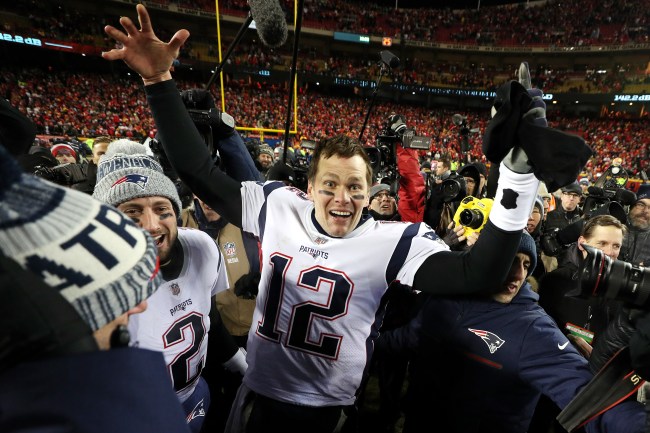 It was just one short year ago when ESPN’s Seth Wickersham wrote a billion word piece on Tom Brady and Bill Belichick’s relationship fracturing to the point that moving forward together was likely untenable. The reasons for their beef were abundant: Jimmy Garoppolo, Brady’s personal trainer, Belichick’s coaching style, both Brady and Belichick being “ruthless and proud self-made men, both secure though still unfinished in their legacies.”

Flash forward to January 20, 2019. Brady and Belichick embrace at mid-field surrounded by cameras after defeating the formidable Kansas City Chiefs in the AFC Championship, punching a ticket to their third straight Super Bowl. Belichick tells Brady he loves him. Brady says it back. They both mean it.

For you non-Instagram users, Belichick telling Brady he loves him and Brady says it back #patriots pic.twitter.com/uK2nGxtBvz

Brady was asked about the exchange during his weekly appearance on WEEI’s “Mut and Callahan Show” on Monday morning and talked about how much he admires his coach. It may be the most candid, honest, and complimentary Brady has ever been publicly towards Belichick.

“We’ve always gotten along great. We’ve worked together for 19 years. So we’ve had the same goals in mind for 19 years. He’s been just a great, great mentor in my life, a great coach. He’s taught me more than anyone ever could about the game of football. I’ve always just loved playing here, and playing for him. He’s the greatest coach of all time and we’ve just had some incredible moments together.”

If my girlfriend spoke about me the way Brady speaks of Belichick, I wouldn’t be sleeping on the couch three nights a week.

Tom Brady and Bill Belichick are trying to become the 6th MVP player and head coach combo in the NFL, NBA, NHL or MLB with 6 titles together.

They’d be the first such combo since Michael Jordan and Phil Jackson. pic.twitter.com/i19cyPCZUL