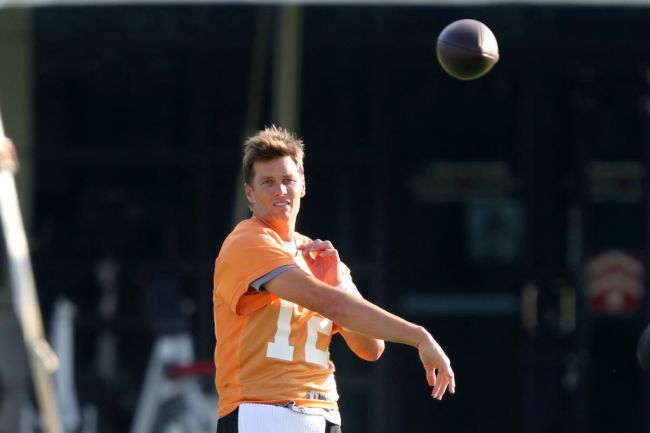 Tom Brady played on a bad knee last year in what was his first season as a Tampa Bay Buccaneer. You wouldn’t know it seeing as how he led the Bucs to the Super Bowl, but it was revealed after the fact that he underwent surgery for a torn MCL he carried with him all season.

The status of his knee was a bit of a question mark heading into Bucs training camp this offseason, but Brady recently reassured everyone that the knee has healed up extremely well.

The 44-year-old revealed to reporters on Tuesday that he’s finally going to get to play without a knee sleeve this season. Brady shared that he’s been wearing a knee sleeve for the last 14 seasons.

Tom Brady said he feels the best he’s felt in a long time. “For the first time in 14 years, I don’t have to wear a knee sleeve.”

This is great news for Brady and the Bucs and absolutely terrible news for the rest of the NFL. Somehow, Brady’s body is getting more durable as he gets older. Father Time simply ignores this man’s jawline, his throwing arm, and now his bum knee.

Brady threw for 4,633 yards, 40 touchdowns, and 12 interceptions a year ago while battling with knee issues. Now those knee worries are gone, he’s got one less thing to worry about, and he’s going to be gunning for that eighth ring feeling better than ever.

This is football, however, any type of injury can pop up at any given second. Odds are that Brady won’t go through the season and come out the other end at 100%, but him starting the season at what appears to be full-throttle should strike fear among the other teams around the league.

It’s inevitable at this point, if Brady is simply standing by the end of the regular season, the Bucs are going to be right there looking to repeat as Super Bowl champs.