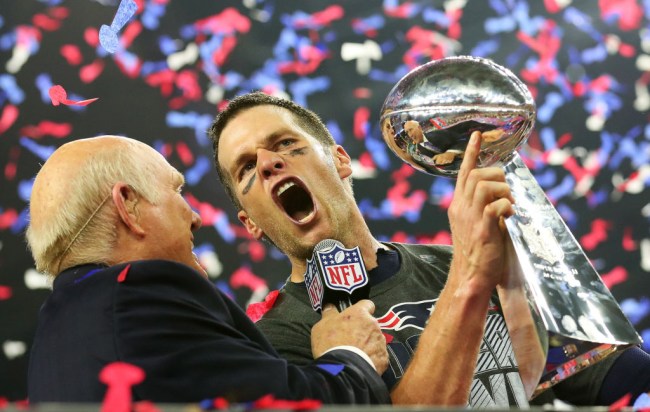 Tom Brady is officially the greatest quarterback in the history of the NFL. He’s the only QB to ever win 5 Super Bowls. He and Bill Belichick combined for the most postseason wins in NFL history (25, and 11 more than the 2nd place duo). Tom’s the only quarterback to win 4 Super Bowl MVPs. And based on reports earlier today, 39-year-old Tom Brady plans on playing in the NFL for another 5 years.

In an interview this morning, Tom Brady discussed both diet and lifestyle changes he made at the age of 25, changes which have allowed him keep on playing up to 40 (and for the next several years, if all goes as planned):

“I’ve tried to just take care of myself through learning through a lot of positive and negative experiences with that. When you’re in a locker room for 17 years, you kinda learn what to do and what not to do and what works for you. I’ve found probably a unique way that’s a little outside the box that’s really worked.
“I try to spread that message to a lot of other players just because football is a demanding sport and it’s a demanding sport on your body. And your body is your asset, and if you are hurting all the time, football is no fun. When I was 25, I was hurting all the time, and I couldn’t imagine playing as long as I did, just because, you know, if your arm hurts every day when you throw, how can you keep playing? And now, at 39, my arm never hurts and my body never hurts. Even after I get banged up, I know how to take care of it and jump on it right away, so that I can feel good for a Wednesday practice.”via BusinessInsider.com

Specifically, these changes involve Tom Brady’s insanely strict diet and daily routine. He goes to bed every single night at 9pm. He doesn’t eat tomatoes and/or peppers and Brady sticks to almost entirely all-natural/organic whole foods. He never touches alcohol. And instead of lifting heavy weights he focuses on flexibility.

I’m not sure if this lifestyle would translate to your Average Joe just trying to live a healthy and fit lifestyle past 40. If you’re not trying to stay as fit as the Super Bowl MVP and instead just want to be healthy and shredded then you can probably have a little more flexibility in your lifestyle choices than Tom Brady. But, if you’re really looking to get healthy there’s no better lifestyle to emulate than Tom’s.