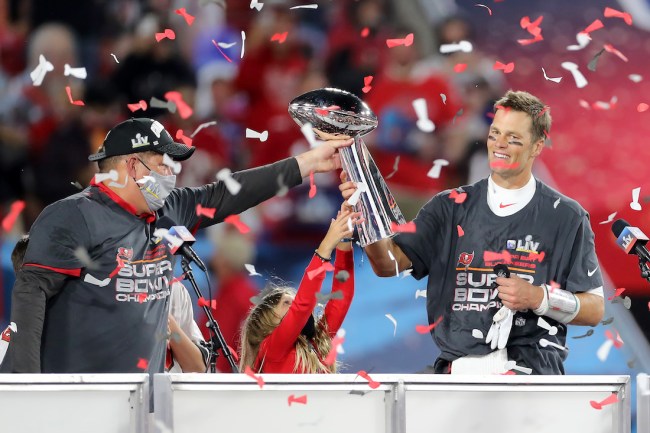 We all know that Tom Brady’s mentality has always been a little different from other pro athletes, as the Tampa Bay Buccaneers quarterback uses a chip on his shoulder to perform at a high level. As a former 6th round pick, that type of motivation has worked wonders for the future Hall of Famer, with Brady winning an absurd seven Super Bowls in his career — and he’s still going.

Even as he approaches 44 years old, Brady didn’t show any signs of slowing down last NFL season, as he threw for over 4,600 yards and tossed 40 touchdown passes compared to just 12 interceptions. Oh, and the postseason once again ended with the signal-caller hoisting the Lombardi Trophy in his first season with Tampa.

It’s actually wild to think that Tom Brady is still one of the league’s best players. Sure, he may not have the best stats or the highlight plays others do, but when it comes to what matters most, winning, he’s still tops.

But what makes Tom Brady’s mentality so unique? What makes the quarterback still want to win Super Bowls? Why does he still commit himself to the sport? Talking to James Corden on The Late Late Show, the GOAT revealed some of the answers.

“It’s hard to walk away from something that you still feel like you can do and you wanna do,” Brady told James Corden of The Late Late Show. “So it’s not about proving it to others what you can do, it’s more about proving it to yourself. And I still feel like even though I’ll be 44 this year, I still have a chance to prove it to myself that I can still do it at 44, because I really worked to a point where I can still do it at this age.”

That type of self-motivation, confidence and pride is just part of the reason why Tom Brady’s mentality has helped him achieve such greatness in his NFL career. It’s why he continues to dominate at his age, and why, even as a new NFL season approaches, he can’t be counted out from winning another Super Bowl.

As for his legacy, Brady’s well aware of his position in league history — but he’s not going to admit that he’s the best to ever do it. Just look at what he told Corden when the conversation turned towards thinking about being the best ever.

He claimed with a straight face, however, that he never thinks about being the best ever.

“You never sit and think, at what I do, I’m the best?” “It’s like saying what do you like better, steak, fish, chicken?” Brady said.

Tom Brady oozes confidence and, deep down, knows he’s the best. But he still feels as if he has something to prove, which is part of the reason why he’s the GOAT. And as we enter another NFL season, no one should be surprised if he adds yet another Super Bowl ring to his finger.