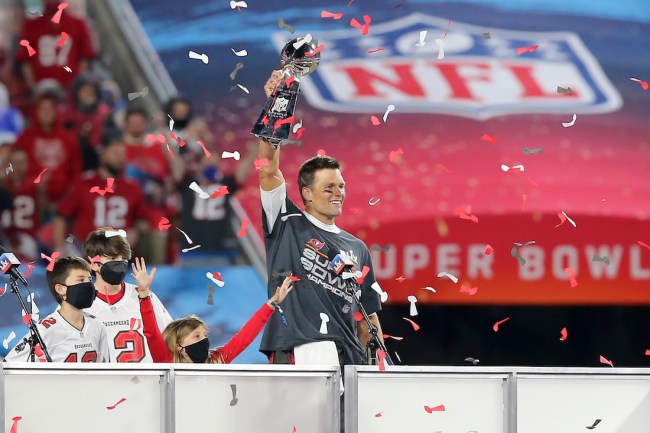 NFL Hall of Famer and current TV personality Shannon Sharpe is sort of over this whole Tom Brady underdog story thing. It’s not that the former bullish tight end doesn’t respect the hustle that the Tampa Bay Buccaneers quarterback has put in and overcome as an athlete, he just thinks that Brady’s narrative about it being unique to only him is played out.

During a recent episode of FS1’s Undisputed, Sharpe was discussing a quote Brady said about his motivation, with the seven-time Super Bowl champ saying he’s still “always kind of motivated” by his doubters. Hey, nothing wrong with keeping that chip on your shoulder, right? Unfortunately, Shannon Sharpe is sort of over Tom Brady’s act, saying that every great athlete has overcome adversity and doubt on their athletic journey.

“The problem that I have with Tom Brady is that he tries to make every experience that he has unique to Tom: ‘I’m the only guy that’s ever been doubted.’ What professional athlete, regardless of the sport, do you think hasn’t been doubted,” Sharpe said.

“Tom thinks that he’s the only one that’s been doubted. So he wants to copyright ‘doubt.’ Just like he wanted to be ‘Tom Terrific.’ He had forgotten that there was somebody 20 years before he was born who was named ‘Tom Terrific.’ He wants to make everything unique to him.

"The problem I have with Tom is that he makes every experience he has unique to Tom. What professional athlete you think hasn't been doubted? Find me one." pic.twitter.com/x4vV353QRZ

Now, look, if there’s anything we know about Tom Brady, it’s that he’ll probably take this criticism from Shannon Sharpe and use it to his advantage. Hell, the 43-year-old’s probably suited up in his backyard already throwing passes to prepare for the upcoming NFL season. Regardless of what the future Hall of Fame quarterback thinks, though, Sharpe is accurate in his claim, because every great athlete has a story of overcoming doubt.

Whether it was LeBron James being doubted that he couldn’t win a title. Or Michael Jordan being cut from his high school hoops team. Or any number of baseball players who bounced around leagues and teams before making it in the majors, Sharpe is right in saying Brady’s underdog narrative isn’t all that unique.

However, what Tom Brady does possess that’s different than most great athletes is the ability to channel negative energy or comments and use them to his advantage. MJ had that. LeBron currently has that. All-timers — or those considered the GOATs in their sports — have a mentality that they’re still the JV player hoping to make the Varsity squad, and that everything hinges on the moment and nothing else. That’s more of a killer mindset than being an underdog, so that’s what Shannan Sharpe should really be talking about when discussing the uniqueness of Brady’s career.