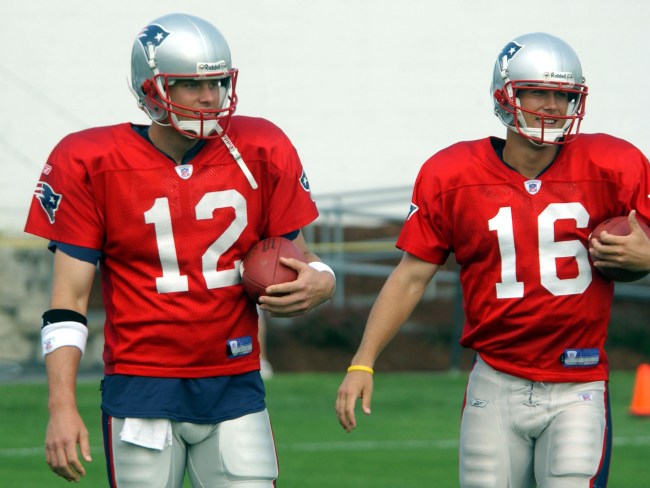 Tom Brady is the GOAT on the football field, but, apparently, he’s also willing to go to great lengths to make sure he gets the best of people off the gridiron, too. That’s the impression that Brady’s former backup quarterback Matt Cassel gave during a pregame interview before Monday Night Football last night, detailing a pretty wicked (and nasty) prank war between the two signal-callers when both were members of the New England Patriots.

So how grotesque was Tom Brady willing to go to make sure he didn’t lose a prank war with Cassel? Far enough that, yep, he even peed on his backup’s practice jersey once, then asked for Cassel’s forgiveness before Brady demanded he call him “Captain Longshanks.”  Take a look below to see how Matt Cassel told the whole story to the Patriots Pregame Live crew before the Pats-Jets game.

“I was coming in and a prank war started where he knocked my trey out of my hand, he put his foot up against the door, I poured some protein shake in his shoes, maybe some flexi-hot into his underwear,” Cassel said. “He dumped a trash can on my car and then decided to pee on my practice jersey, and then he asked me to forgive him and call him Captain Longshanks.

“So I was like, ‘No I’m not doing that, I’m going to do something even worse to you,’ and by the time we came in for practice, I had three tires in front of my locker, the other one was hidden, you know the old ‘put in on the blocks,’” he said. “The old adage goes back to don’t mess with people that have more money than you do.”

Man, Tom Brady really is the GOAT — at, legit, everything he does. That’s just ruthless on his part; and disgusting AF.

Of course, after urine was involved, it sounded as if Matt Cassel was done with the whole prank war and wanted to wave the white flag; smart man. Unfortunately, just because the backup quarterback was ready to end the sophomoric gaffes, that didn’t stop some of the offensive lineman from getting involved, taking things to such a level that Bill Belichick even had to get involved to put an end to the pranks.

“I was done, I wiped my hands with it and said, ‘I give,’” Cassel said. “The lineman decided to fill his car up with (foam) peanuts, put confetti in his air conditioning unit, and, at that point, Bill had to step in and say, ‘Look, guys, this isn’t World War 4, okay. We can’t have you guys going around hurting somebody or killing somebody.’”

And, so, with that, the prank way came to and end… or so Cassel thought. Apparently, even after Belichick put an end to the teammate on teammate crime, Tom Brady still refused to give Cassel back the tire to his car for a few days, forcing the backup to ride home with a buddy instead.

“At the end of the day I did have to go home with my buddy for at least four days before he would give me back my other tire,” Cassel said.

What’s this tell us about Tom Brady? That in addition to his football prowess and competitive spirit on the gridiron, he’ll go to extreme lengths to make sure he wins at everything he does — even if it means pissing on a teammate’s jersey. Yeah, Brady sure is next level ruthless.