New Report Suggests How Much Longer Tom Brady May Play, And We Better Get Used To The GOAT Sticking Around 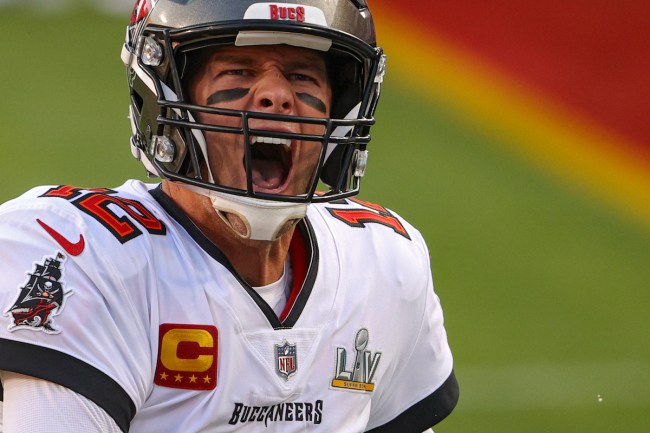 For years, we’ve heard Tom Brady say he hopes to play in the NFL until he’s 45 years old — which, at the time, seemed insane to think about. Then the GOAT went out and dominated in his first season with the Tampa Bay Buccaneers and won his seventh Super Bowl title, proving to everyone that, just maybe, Father Time wasn’t going to win without a serious fight from the quarterback.

As the NFL offseason hits full swing and the Bucs look to restructure the contract of their superstar signal-caller, there’s now talk that Tom Brady could extend his self-proclaimed deadline on retiring. According to CBS Sports‘ Jason La Canfora, the future Hall of Famer may not stop at just 45, but, in fact, could play until he’s 47 or 48 years old.

The reality is that Brady intends to play football until he is at least 45 years old, and, quite possibly, significantly longer. As in years. With an “s,” as in plural. At this point, 45 is a mere baseline. Might be a worst-case scenario.

Could he play until he is 47? Certainly not out of the question whatsoever. Is 48 the magic number? Well, maybe. Could be. Much like art, Brady will know it’s the end when he sees it (or feels it). Suffice to say, he is not anywhere close to that headspace right now, and I don’t see him getting there anytime soon. Absolutely not in this offseason, when the entire motif is about extending his tenure in Tampa Bay, doing whatever he can do to keep this dream team intact and to continue to add to his already unfathomable array of championship hardware as this most improbable NFL career rages on.

If true, this is an insane development, guys. As somebody who remembers 2001 when Tom Brady first broke onto the scene, it’s wild to see the quarterback not only playing at his age, but doing so at a level we’ve never seen before. He’s honestly showing up dudes half his age on the football field, using his mind, preparation and talent to get the most out of his skills. It’s actually kind of a beautiful thing to watch — unless, of course, you’re sick of seeing Brady win so much.

After Brady’s wife, Gisele Bundchen, allegedly asked him what more he has to prove in the NFL after Super Bowl 55, the quarterback simply hugged her and tried changing the subject as fast as he could. So, you know, there’s some hints that the guy’s not quite ready to walk away — especially not after winning his seventh ring.

So just when you thought the demise of Tom Brady was happening before our eyes after an inconsistent 2019 season with the Patriots, the dude bounced back and proved why he’s the GOAT in his first year with the Bucs. And, if he and the team can get a new contract done this NFL offseason, it might be time to accept the fact that guy’s never just going to fade away into oblivion.