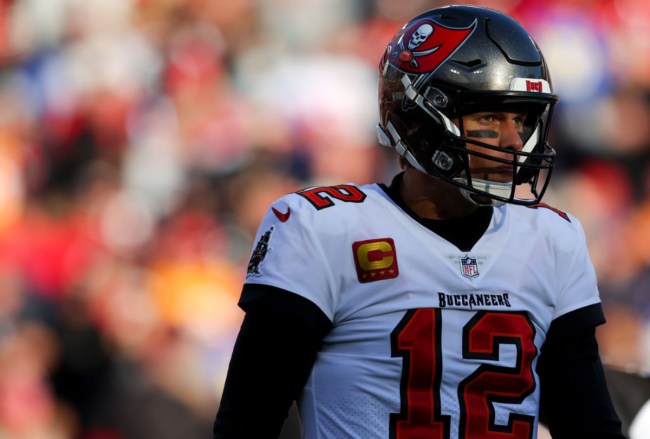 The Los Angeles Rams snapped Tom Brady’s nine-game win streak in Divisional Round games on Sunday in gut-wrenching fashion. Now, with the Bucs’ season cut short, Brady has some thinking to do about his future.

Brady was asked about retirement after the loss to the Rams and explained that he hadn’t put a lot of thought into it and that he plans on taking it day-by-day.

During his radio show on Monday morning, Max Kellerman made the point that Brady is still playing at such a high level and asked the simple question as to why TB12 would retire now.

“For him, there’s a lot. You’ve won seven (Super Bowls) and you’ve played in 10. You’ve accomplished every hardware you could think of in terms of professional sports,” Johnson began.

“Winning another Super Bowl…is probably not going to happen.”@keyshawn explains all of the reasons why Tom Brady should considering retirement. #KJM pic.twitter.com/P56VKtkLE0

Johnson also went on to explain that there’s a staying home and being with the family part but didn’t forget that the rest of the NFC is only getting better, which makes things harder for Brady and the Bucs.

“There’s something to be said for family, and time with your family. He has kids and they’re getting older. I’m sure his son wants to play football, wants to play quarterback, and duplicate that success that his dad had. Living that dream, you want to be there for that.”

“It’s also understanding that San Francisco isn’t getting any worse, they’re going to get better. Arizona is going to figure it out, the Rams just knocked me out. For all the jokes and comedy the Cowboys give us, we don’t know about that. Philly is going to get better. We don’t know what’s going on with New Orleans and Sean Payton…the chances of winning another Super Bowl for the Tampa Bay Buccaneers with Tom Brady is probably not going to happen.”

It’s hard to imagine Brady retiring from the NFL after losing in the divisional round. I think the odds lean toward Brady coming back for at least one more season and trying to go out on top, but only time will tell.