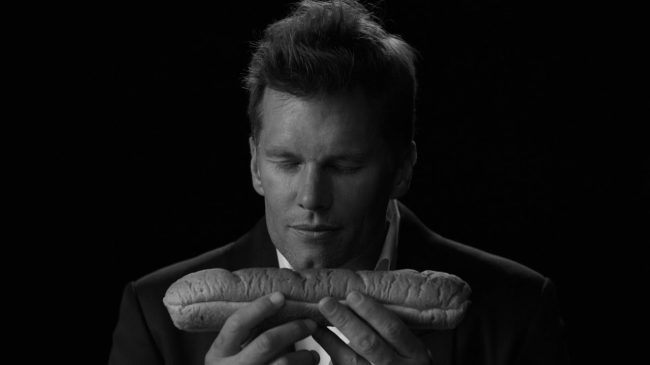 Subway is a fast food restaurant that had to create an entire website to share the “truth” about whether its tuna is real.

Tom Brady is so meticulous about what he puts into his body that he published a self-help book about it, drinks a potentially deadly amount of water, and NEVER COMBINES FRUITS with other food.

Well, it must be, because Thursday night it was revealed during the Tampa Bay Buccaneers and Dallas Cowboys game that, yep, Brady is now a spokesperson for Subway.

This, despite the fact that, as the Boston Globe reported after Brady’s book came out…

That’s when Tom Brady jumps in.

“The new fragrance that says Subway has so much new it didn’t fit in their last ad,” says Brady. “So they bought time in mine to talk about hearty multi-grain bread.”

“Smells so good I can almost taste it,” says Brady.

You are not alone.

First off, Subway, wisely, turned off the comments on the YouTube version of Brady’s commercial. Too bad. Those would have been fun.

I miss 5 minutes ago when I had not yet seen the Tom Brady Subway commercial pic.twitter.com/nQCCH1U4sf

Tom Brady if someone ever made him eat a Subway sub: pic.twitter.com/IOtB8paNa4

Tom Brady after spending the day holding carbs on set for that Subway commercial pic.twitter.com/vDsdvlY2UX

Tom Brady after cashing his endorsement checks from Subway pic.twitter.com/3DYyJtXQi3

That Tom Brady Subway commercial is going to send that Blue’s Clues guy back into hiding.

While the money angle is a good explanation for this inexplicable collaboration between Subway and Tom Brady there really is only one reason why TB12 would ever deign to be associated with food he literally would never eat.